The Alexandria Region is an area of land in Dragon Quest VIII: Journey of the Cursed King.

It contains the town of Alexandria and the Tower of Alexandra to the southeast, expanding from the bridge over Pirate's Cove to the path to Port Prospect.

Past Port Prospect there is a path to Hilltop Hut and the Wild Lands which is temporarily blocked off, but cleared after the Hero and party take care of a task in the Pickham Region

The hometown of Jessica Albert, the third party member. It is a small town with a great mansion at the end. This mansion belongs to the Albert Family. The members of the Albert family are descendants of Alexander, one of the Seven Sages, and are talented in both swordsmanship and magic. 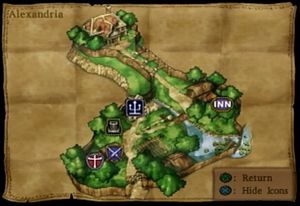 The map of Alexandria

A tower built to the east of Alexandria. At the very top, there is a statue of Alexandra, a descendant of one of the Seven Sages and Jessica's ancestor. She was a great magician and a talented sculptor, having sculpted her own statue, and eventually founded the village of Alexandria. Only the villagers of Alexandria have knowledge of how to enter the tower. The Hero and Yangus journey to the tower to find Jessica, who is on the trail of her brother's killer.

A port town located to the far south of the continent. The Hero and Yangus head here to catch a ferry to Peregrin Quay after the events at Alexandria to continue chasing after Dhoulmagus.

A bridge allowing passage from the Alexandria to the Farebury Region. Though still in use, it was previously damaged by Dhoulmagus

(Additional monsters after the fall of the Black Citadel)