Difference between revisions of "Amor" 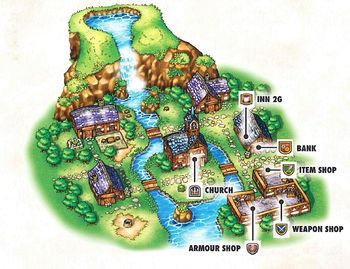 Amor is a town found in Dragon Quest VI, that is located right by a river and a waterfall. The water here is so pure that they even sell it at their item shop.

Around town a story is heard about about two thieves named Evgenya and Ilya who went to plunder the northern cave years ago but Ilya never returned from the cave. At the church The Hero, Carver & Milly met Evgenya who is now old and she asks they would like to rest. Upon the party waking up in Amor's past and exiting the church the town's water began to turn blood red, and the townspeople blame Evgenya and Ilya who went to the cave. Upon arriving at the cave they found Evgenya trying to wash blood off her sword that won't come off and Ilya is nowhere to be found. When they ventured further into the cave they found an injured Ilya who is fighting monster. After rescuing him he is reunited with Evgenya & they properly thank and reward the party before leaving. After returning to town to rest again, the party woke up in the present where Iria comes to visit Evgenya. After talking to them again they are rewarded with the Mirror Key. 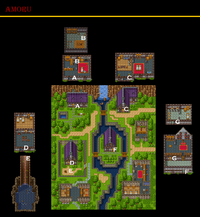