Difference between revisions of "BREAK Monsters" 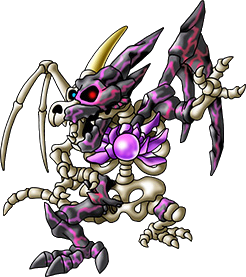 The BREAK form of the Skelegon.

BREAK monsters are more powerful variants of existing monsters like the Skelegon or Archdemon. They appear throughout Dragon Quest Monsters: Joker 3, where they are created by exposure to concentrated Darkonium. Sometimes this exposure takes place as a result of the environment - as seems to be the case for the BREAK monsters seen patrolling the Core. Other times the process is deliberate - such as what takes place in the infusion chambers in the Darkiron Bastille. It would appear monsters are corrupted with this power involuntarily most of the time, although agents of the corrupted Mother such as Azamook relish the additional power gained. BREAK monsters cannot be scouted - instead, to create BREAK monsters, the player must find both darkonium and a monster's "soul" through stealth boxes. Only five souls are available in the entire game - other BREAK monsters are obtained by fusing their normal counterparts with these initial BREAK monsters (with some exceptions, such as BREAK Estark, who is obtained through finding five Devil Genes and then fighting him). BREAK monsters can also be bought from the Wi-Fi plaza for Wi-Fi coins, although the easiest to obtain is the BREAK Slime, which costs only three bronze coins. BREAK monsters are usually a higher rank than their original form with better statlines, and they also possess a unique Δ Body trait, dependent on their size, that increases select stats automatically as they take damage in battle. 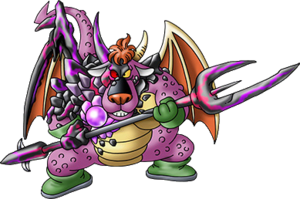 The BREAK form of the Archdemon.
Retrieved from "https://dragon-quest.org/w/index.php?title=BREAK_Monsters&oldid=132316"