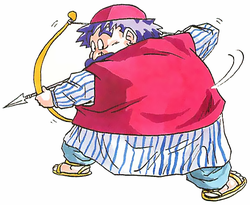 Bows are a recurring type of weapon in the Dragon Quest series, having recently become far more prominent than in past decades. In the early games, bows are typically featured as late-game, "vanilla" weapons with no distinguishing features beyond their considerable might.

In more modern games this stance has changed with the proliferation of the family, becoming the tool of choice for nimble characters such as Angelo. Bucking common RPG trends, bows in DQ games are just as potent as other weapon categories, standing alongside swords and axes as the most powerful families of armaments. Furthermore, ammunition never runs out no matter how many attacks are made, nor are their damage outputs affected by being used in the back row in DQIX.

Bows are one of the three weapon types Angelo may equip himself with. All skills in the set are unique, leading many players to recommend them over his sword options.

Bows can initially be used by Armamentalists, Rangers, and Sages. By completing the Bow skill set, any character may equip a bow.

Bows are the main weapon of Bianca, despite the fact that bows are not usable by her in her original game. Initially the developers of the game considered giving whips to Bianca as her weapon, but decided against it as they were already usable by Jessica and they wanted more balance in weapon types. Bianca is able to stay far from the fray and fire arrows from a safe distance and can charge up her shots to unleash a powerful attack.

Angelo has taken over duties as the main archer in the game, as Bianca can only be playable in co-op dungeons in the sequel.

Torneko does not equip bows in his first spelunking adventure; rather he equips specific types of arrows to his default bow instead. The merchant can only hold so many bolts on his person at a time, which must be purchased at shops or scoured off the dungeon floor to replenish his stock. Each type has a different attack boost and flies at a higher range than the predecessor. The silver arrow is particularly effective as it pierces walls and enemies for chain combos.