Difference between revisions of "Dancer"

The dancer has good style and agility, and can learn several different kinds of dances that debilitate or disable foes. When a party member becomes a dancer, they are more likely to avoid attacks, with the chance depending on their current rank. The exact rate varies between games.

With the vocation's addition to the tenth game, the specialization in Frizz and Sizz spells became a focus of the career on top of cutting a rug. 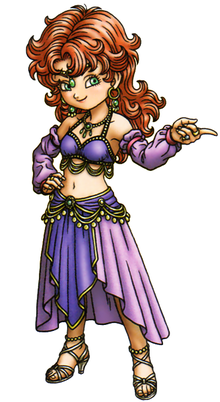 Dancers are once again necessary to unlock the Luminary vocation, and subsequently play a part in making a character a Druid.

Although the Dancer takes 120 battles to master and it has some good skills, when Aishe joins the party, she has already mastered the dancer class. Aishe should be given the time to learn the Sword Dance skill as it is one of the best battle skills in Dragon Quest VII. It is also the most cost effective skill in terms of overall power.

The Hero and Ruff should also learn the Sword Dance skill. It takes 108 battles to bring both classes' levels to the 5th tier where they will learn Sword Dance.