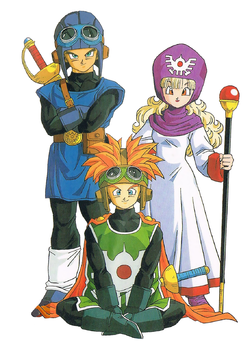 Dragon Quest II is set 100 years after Dragon Quest. The offspring of the original game's hero have migrated from Alefgard to the continent of Torland, and there established three kingdoms: Middenhall, Cannock and Moonbrooke. A century of peace in these three kingdoms is suddenly ended when the evil priest Hargon destroys the castle of Moonbrooke. One lone guard, an injured survivor of the attack, makes his way towards the kingdom of Middenhall. There with his dying breath he informs the king of the dire circumstances. The king then commands his son, the prince of Middenhall and a descendant of Erdrick, to gather his cousins and defeat Hargon before the mad priest can accomplish his goals.

Upon reaching Cannock he is informed by the King of that kingdom that his son has already left for the Spring of Bravery, a traditional place that is visited by warriors upon beginning their journeys. Inside the shrine there is a body of water said to bless pilgrims. Upon arriving, a sage explains that the player was too late, and the prince has once again already left. The prince continued to Middenhall to join the Hero, whom he doesn't know is also looking for him. Finally, the two meet at an inn located in Leftwyne, and the prince joins the Hero's party on his quest.