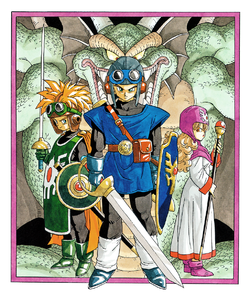 The princess of Moonbrooke is the archetypal sorceress of the three Luminaries. Her armour and weapon selections are slim, but are incredibly potent. She shares some of the prince of Cannock's magic, but the bulk of her spells are exclusive to her. She is the first of the three main characters the player will see, shown being assaulted with her father in the game's cinematic intro. After this she will has been cursed and needs to be freed before she will be able to join her cousins. In earlier releases, her name is generated at random based on the name of the prince of Midenhall, although there is a cheat code to alter her name. As of the Mobile phone release, her name is offered initially via a random generator when the Hero departs from Midenhall, but the player can also decide to give the Princess of Moonbrooke a name of the player's choosing.

Dragon Quest II is set 100 years after Dragon Quest. The offspring of the original game's hero have migrated from Alefgard to the continent of Torland, and there established three kingdoms: Middenhall, Cannock and Moonbrooke. A century of peace in these three kingdoms is suddenly ended when the evil priest Hargon destroys the castle of Moonbrooke. One lone guard, an injured survivor of the attack, makes his way towards the kingdom of Middenhall. There with his dying breath he informs the king of the dire circumstances. The king then commands his son, the prince of Middenhall and a descendant of Erdrick, to gather his cousins and defeat Hargon before the mad priest can accomplish his goals.

Upon reaching Cannock he is informed by the King of that kingdom that his son has already left for the Spring of Bravery, a traditional place that is visited by warriors upon beginning their journeys. Inside the shrine there is a body of water said to bless pilgrims. Upon arriving, a sage explains that the player was too late, and the prince has once again already left. The prince continued to Middenhall to join the Hero, whom he doesn't know is also looking for him. Finally, the two meet at an inn located in Leftwyne, and the prince joins the Hero's party on his quest.

Together the two cousins set out northwest towards Gwaelin's Gate they pass underground and head south for Moonahan. In this village they meet a dog that seems peculiar to them. Upon reaching the ruins that remain of Moonbrooke they are informed by spirits of those that died (including the King himself) that the princess has been turned into a dog by Hargon and the only way to reverse the curse is to use the Mirror of Ra. The two warriors search for this mirror and they find it in a swamp from which four bridges can be seen at once. Upon their return to Moonahan they utilize the mirror in front of the curious dog they met, and much to the surprise of the Hero, he sees a beautiful girl in the reflection of the mirror. The princess is restored from her beastly appearance and joins her two cousins on their quest to defeat Hargon. After exploring the Pillar of Winds to obtain the Windbreaker, the party heads for a shrine west of Moonbrooke where they pass underground and then head northwest across fields, desert, and mountains to reach the Dragon's Horn: two tall towers, each fixated on one side of a river.

Scaling the southern tower to its peak, the party glides over the river below using the Windbreaker, and land safely across the body of water. They continue on to the port city of Rippleport, where they rescue a young girl from a pair of gremlins. Quite relieved upon her return, her grandfather, as a token of his gratitude, offers that the three heroes to use his ship to aid in their voyage. Hearing legends of a sunken treasure, the three set off into the northern sea, and find it glistening in the water. Upon returning it to Rippleport, a man desperate to get out of debt offers them the Echo Flute in exchange for it.

The trio then sails east and land on the continent of Alefgard. They reach Tantegel only to discover that the King has locked himself away for fear of Hargon. They explore the remains of Charlock Castle where they meet a descendant of the Dragonlord who hope to succeed where his ancestor failed. Although the Dragonlord's decendant clearly has evil intentions, even he realizes the threat in Hargon, and reveals to the three young warriors that if they wish to defeat Hargon they must take five sigils to the Rubiss Shrine.

With this new information in hand the party sets sail south of Alefgard and discover a small island in the middle of the ocean on which a prominent lighthouse stands. As they explore the inside of the tower they witness a gremlin vanish into a wall. Following it, they find a passage and are greeted by an old man who tells them to follow him. He guides them to a treasure chest and offers its contents to the luminaries. However upon opening the chest they find it empty and the old man suddenly transforms into four gremlins that charge upon the unsuspecting trio. The cousins defeat the monsters and in doing so recover the Star Sigil, which one of the fiends was carrying.

Dragon Quest II was the first game to introduce the concept of a party. 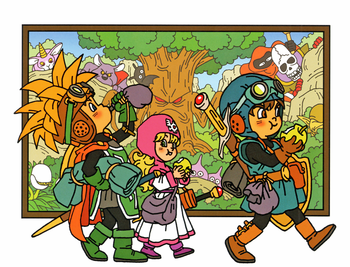