Dragon Quest III (ドラゴンクエストIII そして伝説へ…, Doragon Kuesuto III: Soshite Densetsu e..., "And into the Legend..."), is the third game in the Dragon Quest series of role-playing games published by Enix and released on the Famicom/NES. It was later remade and released on the Super Famicom and Game Boy Color. The original Famicom version, as well as the Super Famicom remake, were re-released on the Nintendo Wii in 2011 as part of the Dragon Quest 25th-Anniversary. A second remake was also made for Japanese mobile phones and later then re-released worldwide for smartphones running Android and iOS. A graphically modified version of this mobile port was released alongside Dragon Quest XI: Echoes of an Elusive Age for Sony PlayStation 4, Nintendo 3DS and Nintendo Switch. Dragon Quest III is the third and final game in the Erdrick trilogy.

On May 27th, 2021 during the Dragon Quest 35th Anniversary broadcast, Dragon Quest III HD-2D Remake was announced, which will utilize the same graphics engine seen in Square Enix's Octopath Traveler. A release date was not announced, but it will be released worldwide simultaneously.

Dragon Quest III is set many years before the original Dragon Quest in a world bearing great similarity to the real world. A wicked fiend, Baramos, threatens to destroy the world, and has begun to exert his vile influence upon the monsters of each continent to drive them mad and violent. The Hero, son or daughter (you can choose to be either male or female) of the legendary Ortega, recruits up to three traveling companions and sets out to defeat Baramos while making his or her way through the world and saving several locations from doom.

The flow of the game is as follows; The Hero travels from his home country of Aliahan for Romaria to explore the world and acquire three key needed to open sealed teleportals throughout the game. During the party's travels, they will hear tale of six mystical orbs said to contain incredible power, and that these will be necessary in overcoming the fiend Baramos. After saving a young couple of the town of Baharata from the rogue Robbin' 'Ood, the Hero receives Black pepper, which he trades for a sailing ship at Portoga. With this ship, the Hero acquires the Ultimate Key and searches for the six mystical orbs which are used to revive the legendary bird Ramia. Ramia takes the Hero to Baramos' castle, flying over the tall mountains of the Necrogond. After a ferocious battle, the Hero's celebration is cut off as Zoma attacks and opens the pit to the dark world. In the dark world, the Hero acquires the Sunstone, the Staff of Rain, and the Seal of Rubiss. These items are then exchanged for the Rainbow Drop. This item creates a bridge, which leads the Hero to Zoma's castle for the final confrontation. After the archfiend is slain, the king of the dark world will give the highest honor to the player: the title of Erdrick.

Dragon Quest III continued to expand upon the gameplay of its predecessors. The game is the first in the series to feature a customizable party in which each character belongs to a certain Vocation, as well as the first in which the player can determine the protagonists' gender. These characters can be recruited by the player by speaking with Patty at her tavern in Aliahan. The choice of profession greatly effects the character's stats and spells they can learn. Furthermore, upon reaching Level 20, a character may change classes at Alltrades Abbey.

Like most Dragon Quest games, III was renamed in its initial appearance in America to Dragon Warrior III. The Priest character class was renamed "Pilgrim," while the priests at churches were renamed healers. The churches themselves were referred to as Houses of Healing and had their Christian crosses replaced with six-pointed stars. Finally, dead party Members were depicted as ghosts rather than as coffins with crosses on the lid as they were in the Japanese version.

The Japan-only 1996 remake of III for the Super Famicom featured significantly updated graphics and sound quality, a new Thief character class, and an extra dungeon to explore and a hidden boss to defeat after the credits rolled, the first for a remake. The Super Famicom version also included a personality system for all members of the player's party to influence their statistical growth, adding much more customization to the game. This personality system would later be adopted by the Dragon Quest Monsters series, Dragon Quest X, and Dragon Quest: Monster Parade.

The 16-bit version of III also added the board game-like minigame from Dragon Quest V: Hand of the Heavenly Bride, Treasures n' Trapdoors. The game was also originally slated to have a collectible Mini medal side quest, but this was cut due to cartridge space constraints. While later titles in the series would include this quest in their original releases, all remakes of Dragon Quest III: The Seeds of Salvation have included an extensive mini medal quest. The later Game Boy Color version of the game, which saw release in America in 2001, was based on this version. The GBC edition would include minor balance tweaks, but is mostly recognized for the inclusion of Monster Medals--gold, silver, and bronze tokens awarded when a particular monster is the last defeated in battle. They do nothing themselves, but attaining all of them opens yet another Bonus Dungeon with a superboss to vanquish at the end.

In 2014, an enhanced port of the Super Famicom version was brought to Cell phones. It retains most content from the Super Famicom version and some of the minor balance tweaks from the GBC release, but removes Treasures n' Trapdoors, the Monster Medal feature, and its associated dungeon. This version was made available outside of Japan on December 4th, 2014 and featured a newly translated script in-line with the standards set by Plus Alpha that also does away with the lingering censorship of the GBC version. This version would later be re-released in Japan for the PlayStation 4 and Nintendo 3DS on August 24th, 2017, and eventually for the Nintendo Switch worldwide on September 27th, 2019. 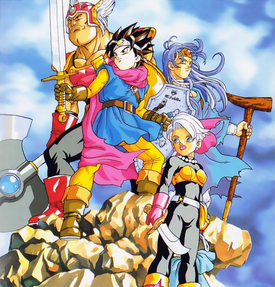 Art from the Super Famicom guide.

While the game shares visually the same content as its original NES release, there are a few notable differences.

Based on the SFC version, with the following differences from the remake.

The game utilize the same graphics engine seen in Square Enix's Octopath Traveler, while keeping the 16-bit style from the SFC remake.