Dragon Quest IV: Chapters of the Chosen (導かれし者たち, Doragon Kuesuto Fō Michibikareshi Monotachi?, literally meaning; The People Who Are Shown the Way) is a role-playing game and the fourth instalment of the Dragon Quest video game series. The game was originally released for the NES but was remade for the Sony PlayStation and later the Nintendo DS. It begins the Tenkuujyou (Celestial Castle) trilogy.

Dragon Quest IV had a unique way of advancing the story. It was split into five chapters. The first four chapters were told from the perspective of the hero's future companions. The fifth chapter was the hero's quest. During that quest, the player meets with and joins with the companions whose stories were told in earlier chapters. Then, with a full cast of companions, the group would begin their journey to save the world.

Dragon Quest IV introduced several new features over the first three titles; namely the new chapter-based structure of the game's plot. Also the inclusion of the, now common, casino. In addition, there were party member artificial intelligence options, which allowed players to give strategies to their party while still directly controlling the hero character. Finally, the wagon which allowed extra characters to wait and be exchanged during battle if needed.

The story in Dragon Quest IV revolves around the journey of the hero and his/her companions and their quest to prevent the resurrection of the ruler of evil, Estark. The first four chapters of the story are about the hero's companions and their own journeys. While they each travel with their own goals and dreams in mind, they all eventually find out about Psaro and his plot to kill the hero and revive Estark, leading them all to join forces so they can put a stop to Psaro and his plans.

The Hero finishes up a routine training of swordfighting and before heading home, encounters what appears to be a talking frog. This portion of the story was introduced in the Playstation verison, and used in the Nintendo DS version as well.

Ragnar McRyan (ライアン, simply Ragnar in the NES localization), one of the soldiers in the royal palace of Burland, is sent by the king on a journey to find out why children are disappearing across the kingdom.

Alena (アリーナ), princess (Tsarevna in the Nintendo DS localization) of Zamoksva, who slips out of the castle in hopes of seeing the world that exists beyond the castle walls. She is accompanied by the priest Kiryl (クリフト) and the mage Borya (ブライ).

Torneko Taloon (トルネコ, simply Taloon in the NES localisation) lives in Lakanaba with his wife and son, and works part-time in the local weapon shop. He aims to become the best merchant in the world, and begins his chapter in search of a regional treasure that could help him accomplish his goal.

Chapter 6 is a post-epilogue continuation of the game's storyline. Originally appearing in the PlayStation remake of Dragon Quest IV (and the subsequent DS port), Chapter 6 offers a lengthy bonus dungeon, and the culmination of certain plot points that were left ambiguous in the original release. 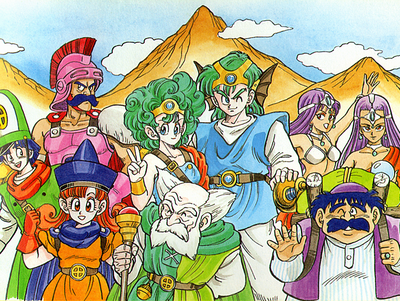 Dragon Quest IV was remade for the Sony PlayStation on November 22, 2001 in Japan. It was developed by Heartbeat and published by Enix. The remake was developed using Dragon Quest VII 's 3D graphics engine, but was still Dragon Quest IV's story and world. With this remake came new features; among them were a new chapter, a new character, a boom town reminiscent of VII's, an inter-party talk command similar to Dragon Quest VII, and the ability to turn off the artificial intelligence for party members. The Enix of America Corporation originally planned to bring the remake to North America in 2002, but it was later cancelled due to Heartbeat closing its video game development operations.