Dragon Quest IV is the first of the series to not be related to the lineage of Erdrick--the game is the first of a new trilogy revolving around the legend of a castle in the sky that watches over the world below. The world map is of a comparable size to that of III, but has no direct parallels to the real world in regards to the shape of the continents and nature of the kingdoms.

Introduces Hero and his/her friend Eliza. This portion of the story was introduced in the PlayStation version, and became standard in later remakes. 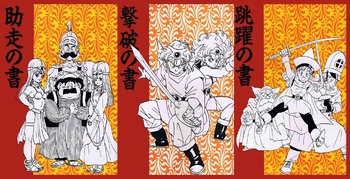