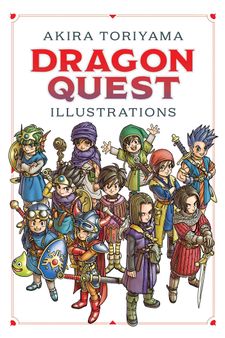 Dragon Quest Illustrations: 30th Anniversary Edition is an artbook celebrating 30 years of art of the Dragon Quest series, as illustrated and designed by Akira Toriyama. It was originally released in Japanese as Dragon Quest Illustrations (ドラゴンクエスト イラストレーションズ, , Doragonkuesuto Irasutorēshonzu?) on May 27th, 2016 by Japanese publisher Shueisha. American manga publisher Viz Media publishing the English language version of the book on December 11, 2018.

The book contains over 500 drawings by Toriyama from throughout the series, ranging from the first eleven games in the main series and the various spinoffs, such as Dragon Quest: Abel Yuusha, Dragon Quest Monsters, and Dragon Quest Builders. It also contains never-before-seen pieces of concept art and insight by the editorial staff of popular Japanese manga magazine V Jump about various pieces of art from throughout the series. The book ends with a special message by creator Yuji Horii and a preview of Dragon Quest XI: Echoes of an Elusive Age, which had yet to be released when the artbook was originally released in Japanese.