Dragon Quest X: Mezameshi Itsutsu no Shuzoku Online (ドラゴンクエストX オンライン, Doragon Kuesuto Ten: Onrain?) is the tenth game in the Dragon Quest series. It was announced at a press conference in January 2009. On September 5 2011, it was announced to be an online multiplayer game for the Nintendo Wii and released in Japan on August 2, 2012. Dragon Quest X is also playable without the online feature.

Two physical expansion packs were released for the game: Nemureru Yūsha to Michibiki no Meiyū in 2013 and Inishie no Ryuu no Denshou in 2015. Also, there was a manga series, Dragon Quest: Souten no Soura. A Nintendo Switch version was also announced on January 12th, 2017 during the Nintendo Switch Presentation, though at the moment, it will only be in Japanese.

Dragon Quest X is the first game inside the numbered titles that breaks the Dragon Quest tradition of turn-based combat; the combat becomes more action-based by breaking the order of the attacks.

The game includes a quest system like in Dragon Quest IX, but with some changes. Quests serve as side-stories helping non-player characters around the game's world. Multiple quests can be performed simultaneously with some even interlocking and unlocking various stages in fellow quests. Early quests include gathering magical spring water, slaying monsters and stealing for a fellow thief. Like the previous Dragon Quest installment, Dragon Quest X contains many open ended mini-quests. Upon completion of the quests, a "Quest List log," serving as an in-game achievement list. There are also brand new "Job quests" that can only be received when you have the job that is requested.

This game also includes two new features as a reference to other RPG games: the Fire Colosseum and the Magic Labyrinth. The Fire Colosseum allows the player challenge again some storyline bosses that are modified to be stronger and the Magic Labyrinth acts like the grottos of Dragon Quest IX. Although the first one is located at the top of a snowy mountain, several labyrinths can be encountered during the gameplay, and in the most strange possible places, like a mirror in the Royal Palace of Gran Zedoura in Rendaashia.

Like the rest of the Dragon Quest games, except for Dragon Quest IX, the game allows the player to save their progress in 3 different save slots. 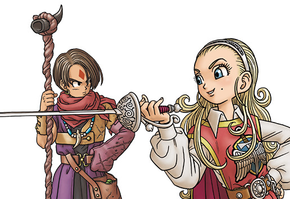 The story begins on the village of Eteene, the home of the Hero and their sibling, when the Hero is looking at the sky at the centre of the village, their sibling calls them, and they are shown to be riding the turtle Kame-sama along with Lady Abba, the eldest woman of Eteene. When Kame-sama reaches the point where the hero is, their sibling offers to ride with them, however Lady Abba refuses and starts talking with the Hero.

A strange noise awakens the hero from a dream, only to learn that their sibling accidentally destroyed the village's supply of Perky Beans, Lady Abba's favorite food, in an attempt to multiply them via alchemy. At Eteene's church the hero meets Lady Abba's grandson, Singh, who instructs the hero to gather various items from the local villagers, so that they can fashion a pillow to serve as a compensation for the lost of the perky beans. Lady Abba then asks the hero to look for their sibling, and despite being upset at Singh for disturbing her, she still uses the pillow they made, falling into a deep sleep. After locating their sibling in a cul-de-sac trying to do more alchemy in the Eteene region, the hero returns to the village, where Lady Abba announces that village will surely be destroyed, with no survivors. However, hope remains in the form of a plant known as the flower of Tensu, which blooms in a cave to the north. The hero, their sibling, and Singh are chosen to retrieve it. Arriving at the cave, the party interrupts a demon called Bedora, who attempts to destroy the Flowers of Tensu to prevent their use. Bedora fights the trio but loses. In a last attempt to fulfill his mission, he attacks the flowers one last time, destroying them. However, one of them survives his rampage.

The party is seemingly too late however, as the village is under attack by the time they return. In an attempt to protect their sibling from an oncoming fireball, the Hero unknowingly casts a spell long thought to have been lost to history; the ability to surpass time. The hero's sibling is safe, though is teleported elsewhere. A monster witnessed the event and quickly notifies his master, Lord Nergel, who was supervising the attack. Nergel apparently kills both the Hero and Singh with a fire spell and to assure that the Hero won't rise again he places a dark seal covering the central continent of Astortia, Rendaashia; trapping all its inhabitants in the deepest darkness.

Kame-sama, which survived the siege of Eteene thanks to its magic powers, uses a spell that splits the soul of the hero from their corpse and transports it to the Heavenly Shrine where they are given the option of being born again but as a member of one of the citizens of the Five Tribes.

In an unknown grassland a man was chasing a woebergine knife in hand, however when he is about to catch the monster he trips with something and falls to the ground, causing the monstruous aubergine to flee. By looking back where he tripped he found a human body, the Hero's sibling. While Isshou was scolding them the sibling gained consciousness again, however since now the player is controlling them he didn't show any trace of his cheerful and carefree personality. Isshou left running again, still searching for the woebergine and left the sibling alone in the grassland.

The sibling, then, headed to the north, to the coast town of Narubia. During the exploration a particular house caught their attention, it has an icon with a silver pot decored with jewels on it, inside there was the pot of the sign (which is actually the alchemy pot and a sleepy girl in one of the beds nearby. Isshou entered the house when the sibling tried to touch the alchemy pot, while talking to them Isshou realized that the interest of the Hero's sibling in alchemy and gave him a recipe book and the recipe of the strong medicine. After alchemizing one strong medicine, Isshou revealed his true intentions about letting the sibling use the alchemy pot: to synthesize one merazo medicine so he can finally treat his daughter's illness, the girl that was at that moment lying in the bed.

After obtaining the ingredients in the grassland and brewing the medicine, the sibling gave it to Isshou who would then utilize it with the girl. As soon as this was done, Ririoru showd immediate signs of improvement and Isshou invited the sibling to sleep in his house. At the next morning Ririoru was showed to have recovered from her illness and thank the sibling for saving her and Isshou asks if he needs something in exchange, when hearing this the sibling ask them if they've known about a village called Eteene. Ririoru reacted to the name of the village and ran to another point of the room where a scalet box was kept, she came back with the box, opened it and took in her hands a bottle and a letter. She then gave the bottle to her father and read the letter to the Hero's sibling, in the letter it was written about a mythical town called Eteene where magic rituals were made, something Isshou found ridiculous and said that all of that was nonsense, this triggered Ririoru and they started arguing, although Ririoru won and her father had to change his opinion. After the discussion Isshou gives the blue shrine key to the sibling and tells them that somewhere in the grasslands there are seven mythical shrines hidden and that the key that he had given them opens the door of the first of them, the Blue shrine. By opening all the shrines and passing the trails inside of them, the path to Eteene would be opened. Once one shrine has been completed by the player, they can obtain a material needed to forge the key of the next one by alchemy. After completing the last shrine, the golden shrine, the Hero's sibling unlocks a door at the back of it and it, surprisingly, leads to the north of the Eteene region, the Unnamed field of flowers.

The Hero's sibling arrived again to Eteene and the village wasn't destroyed anymore, however he didn't know the identity of the inhabitants of the village and their house was now an Inn. Confused he goes to the church to talk to lady Abba, however a guard interrumpted them and told them that they had to offer a perky bean to enter to the church. Once the bean is received by the guard she enters to the church and, a turmoil later, she exits the church worried and a flash of light throws her to the ground. This flash of light also awakens Kame-sama, which was sleeping in its stall. Another woman exits hte church, it's lady Abba; or at least it looks like her, but she really is lady Elba. She congregates all the villagers in front of the church and they start to cheer when she presents another person, a little white-haired girl who exits the church escorted by another kid. This girl introduced herself as Abba and showed to the village the bean she had received. Lady Elba scolded her for making the villagers waste their time, so Abba presents the Hero's sibling as the person who had introduced perky beans to the agriculture of Eteene and then she told the crowd that the reunion is over. After a little chat with Abba, the sibling understood that when they were saved by the Hero during the destruction of Eteene, they were actually sent 100 years to the past and sadly they sent a prayer to they brother/sister knowing that they would be never reunited again.

Version 1: Awakening of the Five Tribes

The Online Mode begins with the hero's soul being transported to a shrine where you ultimately decide which of the 5 tribes (Ogre, Weddie, Dwarf, Puklipo, and Elf) you would like to play as. As soon as your character design is finished, the hero's soul enters the body of the character you designed, which was originally just a corpse. After collecting 6 out of 10 Key Emblems, a sage attempts to create a bridge leading to Nerugeru's lair. When it fails, he decides to separate the hero's soul from the body he/she was inhabiting in a desperate attempt to try another method. This proves to be successful, as the protagonist then meets the body's original owner. The hero's mission is made clear when he/she realizes that a sacred vessel called the Ark of the Heavens is the only thing that can penetrate Nerugeru's defenses. The hero then travels 500 years into the past, where the Ark of the Heavens was last used in recorded history. After fighting Razban, a demon bent on bringing Nerugeru to life, the hero forges a friendship bond with a young boy who knew the secret to using the Ark of the Heavens. Returning to the present, the hero entered Nergel's lair, and after a long battle, emerged successful. After the ending credits roll by, the hero is greeted by the sage from before, who informs him/her that despite Nergel's defeat, the seal he had on Rendashia was still active.

Version 2: The Sleeping Hero and the Guided Allies

Version 3: Lore of the Ancient Dragon