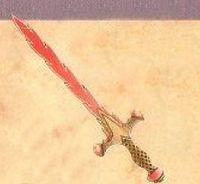 Flame sword as shown in the Dragon Quest guide.