Difference between revisions of "Gladiator" 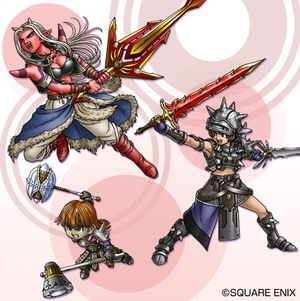 Gladiators in Dragon Quest X
An expert fighter who's mastered the way of the warrior and the martial artist. --Description from Dragon Quest VII

The Gladiator (バトルマスター, Batorumasutā), also known as Battlemaster or Dragoon, is a recurring, full-frontal offensive vocation in the Dragon Quest series. A gladiator is a fierce fighter who rains continuous carnage on the foes who face them.

Gladiators eschew the balance of offense and defense that warriors display for pure power. This means that a gladiator will always be able to deal the most damage among the party, but at the cost of being deceptively frail for all their might. Thus, a gladiator needs ample support from its party members to stay alive long enough to crush the opposition and should be the first recipient of Buff in any battle.

In addition to increases in Strength, HP, and Agility, Gladiators also gain a variety of powerful skills that allow them to deal with many different enemies. A character requires mastering both the Warrior and Martial Artist vocations to become a Gladiator. A unique trait of gladiators is their ability to brush-off an attack, essentially being an additional evasion boost that goes up along with their rank. 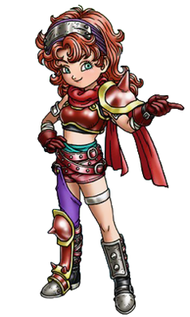 Gladiators are required to master (alongside Paladins) to unlock the Champion vocation. Though they no longer shrug-off blows, they now have the high critical hit rate of the martial artist. 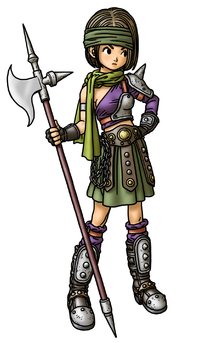 Gladiators can wield Swords, Axes, and Hammers as weapons. The main selling point of Gladiators is their extremely high Attack, allowing for powerful strikes. However, their Defense is lower than that of the other melee classes, and many of their best abilities will either lower their Defense further or deal recoil damage. Fortunately, they can equip the heavier armor that Warriors and Paladins wear, but are unable to equip a shield without investing 100 skill points into the Shield skill line while in another vocation.

Statistically, Gladiators far outstrip even Warriors in terms of raw attack power, boasting a monsterous base 500 Strength at level 99 compared to the Warrior's 404. This is balanced by the fact that Gladiators suffer from comparatively lower HP, MP, and Resilience. However, Gladiators also have more Agility and Deftness, as well as a negligible lead in Charm (only a single point; Warriors have a base 89 Charm at level 99 while Gladiators have 90).

In battle, Gladiators will usually be the target of initial Attack-boosting spells such as Oomph, and will typically attack every turn if able. For maximum damage, Gladiators can equip the Über Falcon Blade and repeatedly use Falcon Slash to deal immense single-target damage, which makes sword-wielding Gladiators highly valuable in boss battles.

Gladiators have the unique skill set "Guts." Their Coup-de-Grace is "Tension Boost," which increases their Tension to at least 50 (if not 100). In other words, it is equivalent to using Psyche Up four times, but like Psyche Up, the final "use" may fail to boost the user into the 100 Tension level.

This vocation is unlocked by completing Quest 103 "Gladiator Graduator" at Alltrades Abbey. Afterwards, characters may change into the Gladiator vocation, and new Gladiators may be recruited at the Quester's Rest in Stornway.

The gladiator gains the unique ability to wield two weapons at once. The attack power of the left hand is exactly half of the gladiator's right hand.