The Great sabrecat is a recurring monster in the series, and one of the most popular members of the Beast family by far. A combination of characteristics from every major feline family, the species stands out as being easily tamable compared to most other monsters and real-world cats. Having made an excellent first impression with players in 1992, the great sabrecats have become a fixture of spin-off titles ever since.

Great sabrecats can be summoned by ringing Baumren's bell. The sabrecat will then transport the player around the world map at a faster rate than walking, except for Empycchu island. This side quest is found at Chateau Felix. 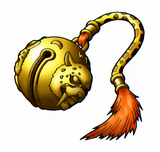 The great sabrecat is a Rank C nature monster in Dragon Quest Monsters: Joker 2. One can be created (with slight difficulty) by mixing two great sabrecubs, then synthesizing two more and then fusing together the products of the original pairs that were synthesized.