Difference between revisions of "Kōichi Sugiyama" 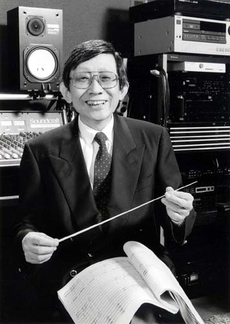 Kōichi Sugiyama (すぎやま こういち, Sugiyama Kō'ichi?) (his birth name is 椙山 浩一, which is pronounced the same) (born April 11, 1931) is the controversial lead composer of the Dragon Quest series, with other works done for Japanese TV shows, such as Space Runaway Ideon, Cyborg 009 and Gatchaman. Because of the incredible length of his career, Suigyama's accomplishments have been officially recognized by the Guinness World record association.

Sugiyama started composing with a smaller Japanese home computer called the "PC-8801", and was working for Enix (now known as Square Enix). In 1986 he composed for the hit RPG video game Dragon Quest for the Nintendo Entertainment System. That game became something like an orchestral introduction to younger people in Japan. Sugiyama is the very first video game composer to record his video game music with a live orchestra. In 1986, the CD "Dragon Quest I Symphonic Suite" was released, utilizing the London Philharmonic Orchestra to interpret Sugiyama's melodies.

In 1987, he composed for Dragon Quest II: Luminaries of the Legendary Line, and then held the very first video game music concert in the world. "Family Classic Concert" was arranged and conducted by Sugiyama himself. It was performed by the Tokyo String Music Combination Playing Group on August 20, 1987 at Suntory Hall, Tokyo, Japan. "Dragon Quest I Symphonic Suite" and "Dragon Quest II Symphonic Suite" were performed. The "Family Classic Concerts" have done exceptionally well with audiences every time; since then, Sugiyama has held over eighteen of them all across Japan.

Sugiyama continued to compose for video games from 1987 to 1990. In 1991 he introduced a series of video game music concerts, five in all, called the Orchestral Game Concerts, which were performed by the Tokyo City Philharmonic Orchestra and Tokyo Symphony Orchestra. The performances included over eighteen different video game composers such as Koji Kondo, Yoko Kanno, Kentarou Haneda, Nobuo Uematsu, Keiichi Suzuki, as well as Sugiyama himself. These concerts were held from 1991 to 1996; during this time, Sugiyama composed for other video games and arranged some of them to be performed in the Orchestral Game Concerts.

In September 1995, Sugiyama composed the Dragon Quest Ballet, which was choreographed by Minoru Suzuki. It premiered in 1996, and came back in 1997, 1999, 2001 and 2002. During those years, Kōichi also released the Symphonic Suites for the Dragon Quest games he had worked on thus far. As this was the very first ballet inspired by a video game in the world, Sugiyama was awarded a place in the Guinness World Records book for his accomplishment.

In 2005, he was holding a series of concerts in Japan with the Tokyo Metropolitan Symphony Orchestra for Dragon Quest VIII: Journey of the Cursed King, as well as his classic compositions from the past. In August 2005, his music from Dragon Quest was performed live at the European Symphonic Game Music Concert. There, for the first time, his music was presented in a live symphonic concert outside Japan.

From 2006, he also worked on diverse projects, one of them being the music for Dragon Quest Swords: The Masked Queen and the Tower of Mirrors. On August 19, 2006 Sugiyama announced Dragon Quest IX: Sentinels of the Starry Skies's production in Japanese video game magazine Famitsu as saying "I'm not sure when Dragon Quest IX will be released, but it seems that progress is continually being made. I'm personally excited." 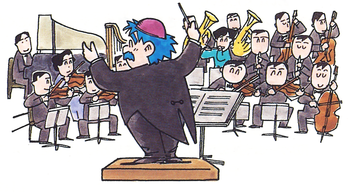 Sugiyama has a lengthy career of composition spanning several decades. Some of the highlights of his work include: 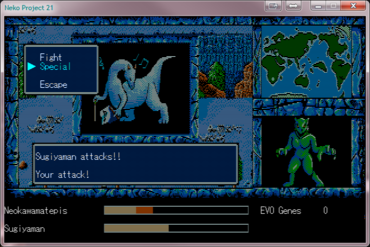 Sugiyama has stated that Johann Sebastian Bach, Wolfgang Amadeus Mozart, Joseph Haydn, and George Frideric Handel are his main sources of inspiration. His style varies between games and other media, but maintains a strong thematic quality reminiscent of Baroque and early-Classical work.