Difference between revisions of "Khoryv"

Khoryv (Kanave in older translations) is a village in the overworld of Dragon Quest III. It is located in the mountains north of Romaria and south of Norvik.

The town is an optional location in Dragon Quest III as it does not possess any key items for completing the game. It serves as a stopping point for completing two nearby side quests: the Skyfell Tower and the Dreamstone quest.

Khoryv is also the first opportunity in the game to acquire the poison needle. One can be found in a treasure chest in the item shop at night. This is the only opportunity to acquire one until much later in the game when they can be purchased in Persistence. They are also rarely dropped by enemies in various locations.

Khoryv is near an area of the world map which has errors in its enemy boundaries. By traveling east from the town along the river, enemies from the southern region across the river can be encountered. These enemies are extremely powerful compared to those near Khoryv and can give a huge experience boost if defeated early in the game.

One of the enemy types found near Khoryv is the Killer bee. These enemies can cause a player to become paralyzed when being attacked, the first appearance of this status condition in the game and series. This condition is necessary to perform the numb status glitch. Fighting killer bees is the earliest point in the game where the glitch can be performed. 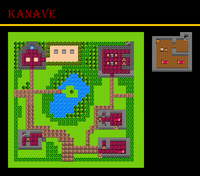