Difference between revisions of "Lunar fan" 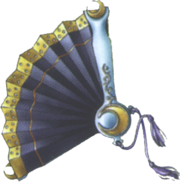 The lunar fan, also known as lune fan, is a recurring fan in the Dragon Quest series. It is a fairly powerful weapon featuring a crescent moon design.

The lunar fan has an attack bonus of +60 and a style bonus of +30. It can be equipped by Maribel and Aishe. The lunar fan can be purchased from Wetlock and other shops for 7,700 gold and sold for 3,850 gold. If the lunar fan is equipped with a dancer's costume when being ranked for the Excellence Grading Organisation, they provide a +35 bonus to Style.

The lunar fan has an attack bonus of +78 and has a chance of inducing paralysis on an enemy. It only appears in the 3DS version and can only be equipped by Red. It can be sold for 4,700 gold. The lunar fan can also be used to make a Solar fan by combining it with a flame shield and a magma staff or Oriental warrior wear by combining it with a crimson robe and a flowing dress.

Lunar fans have an attack bonus of +58 and they can be wielded by Maya.