"...Malroth! Lord and Master of Destruction! Receive of me my flesh in willing sacrifice...! Nnngh!"

Malroth, also known as Master of Destruction, is the final boss of the video game Dragon Quest II. Malroth is not mentioned in his debut game until the finale, except for a false idol bearing his likeness which is found in a cave and is needed to uncover the Cave to Rendarak. Malroth can use the spell of Fullheal in his original appearance, leading to infamy amongst fans and adding to the already considerable challenge of DQII.

Malroth reappears in Dragon Quest Builders 2 as a central figure, but as an amnesiac young man instead of a hideous demon. The circumstances to his sudden change of appearance, as well as his forgotten past, are crucial to the game's story.

Malroth is a large, chimeric abomination covered mostly in blue scales (green in the original NES Dragon Quest II) and wearing only a necklace with a skull on it. He has six limbs, four of which appear to be arms, a massive pair of demonic wings and a serpent for a tail. His mouth is always shown as being a wide-opened grin, fangs clearly visible.

Being a god of destruction, Malroth is immensely powerful and more than capable of living up to his title. In all of his appearances Malroth has almost never spoken, preferring annihilation over conversation. At the start of Dragon Quest II, Malroth is only alluded to and rarely by his name. All that is first hinted to is his penchant for destruction and the fact that the Children of Hargon threatens all of Alefgard by trying to summon him. Being the cult's object of worship, Malroth is highly esteemed by his devotees--not that this matters to him, as his description in IX states that he doesn't mind where his sacrifices come from.

The player's party does not come face-to-face with the mighty demon until after Hargon is slain. When the party tries to move away from Hargon's throne their path will be blocked by flames and the floor will begin to break apart, heralding Malroth's return. Though successful in defeating Hargon, the sorcerer summoned the god of destruction in death, leaving the heroes to contend with him in the final battle.

"Malroth is a fine warrior, I warrant, but I fear his recklessness could get us all killed. I trust you will do all in your power to restrain his... darker impulses"

—Anessa on Malroth to the Builder 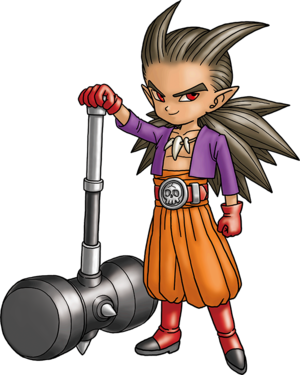 As aforementioned, the vast majority of his appearances Malroth has little discernible personality outside of being a god of destruction who demands sacrifices. The major exception to this is his appearance in Dragon Quest Builders 2, where he is one of the game's main characters.

In his humanoid form he initially has no inkling of his true nature as the Master of Destruction. His amnesia and severely weakened state appear to be what allow him to begin to form attachments to others.

Regardless, Malroth retains a violent disposition and defaults to casually threatening those that annoy him; though he refrains from actually harming helpless nuisances. He has a particular habit of threatening to kill Lulu as a sacrifice to him, though he does so jokingly (probably). His tastes stray from what could be considered normal: he expresses his approval of the architecture used by the Children of Hargon, enjoys dark and subterranean areas, thinks that False Idols are "cool", and likes Lulu's cooking.

Malroth demonstrates a lack of knowledge on many concepts, with an almost childlike ignorance at times. During his adventure with the Builder, three concepts in particular catch his interest: "dreams", "love", and "conviction". When Lulu arranges a party for him and the Builder he is not sure how to act and thinks it is a pointless gesture, but appreciates it anyway.

Malroth does not understand typical social graces and is often prone to outbursts and bluntness, leading to some humorous exchanges early on and less humorous conflicts later. He quickly develops a habit of using a high-five with the Builder as a celebratory gesture, but he is unsure of what inspired him to start doing so. Over the course of their adventure, he becomes close friends with the Builder.

Warning: Spoilers!
Click expand to view content
His attachment to the Builder lasts even after Hargon forces him to attain his true form. When he and the Builder clash, he very obviously holds himself back despite expressing his desire to consume the Builder moments beforehand. The great dissonance between his newly developed sentimentality and desire for destruction causes him to split into two entities, his human avatar which retains said sentimentality, and his unrestrained true form which retains its single-minded directive for destruction. Malroth is later able to recombine and the personality developed during his time with the Builder appears to have attained dominance.

Malroth was the deity that Hargon and his cult worshiped; though he is never directly mentioned. Hargon sacrifices his body to be able to summon it as a last resort before the faux High Priest's defeat at the hands of the heroes.

Malroth's name is only mentioned occasionally within the game and does not truly appear until the very ending. In the original NES version the False Idol is known as the Eye of Malroth, this marks the only time he is slightly referenced; but there still exist statues in several dungeons that depict him. In contemporary remakes, like the Android version, summoning a deity of destruction is mentioned to be Hargon's ultimate goal but never referred to with its name until the end.

It is revealed in Dragon Quest Builders 2 that his name is known only in the highest ranks among the Children of Hargon, this was presumably thought up by Hargon himself so that only he could address the deity and, by this tactic, it could only listen personally to his nihilist pleas.

After its original appearance, it has become a recurring monster in the Dragon Quest Monsters series as well as other spin-offs.

Malroth (Sidoh at the time) is one of the many boss characters players can breed to obtain. He also appears as the boss of the Gate of Demolition, though only on the second time through: players must first defeat Hargon and then go through the gate again to confront Malroth, whose presence is noted by Watabou when Hargon is defeated. It is interesting to note that this is the only time Malroth speaks in person, talking with pauses between words and occasionally syllables.

Malroth (Sidoh at the time) is present. Additionally, like several other boss characters, he was given an additional form called Genosidoh, a far more fearsome looking form than that of his original.

A god of destruction who plans to usher death
unto all living beings.

Malroth is present as a rank S member of the Demon family and is integral to synthesizing some of the most powerful monsters in the game, being needed to synthesize Zoma and Nimzo. Malroth himself can be synthesized by using a Living Statue and a Demon-at-arms, though other combinations exist.

Malroth can be synthesized by combining a buffalogre with Hargon.

Malroth has the same synthesis recipe here as in the previous game.

Malroth appears as a Legacy Boss, obtained after completing Quest #151 (only available through Wi-Fi or received at special events). He will become enraged once his health drops to orange range.

Malroth is a major character appearing in Dragon Quest Builders 2. He accompanies the player as a helpful NPC for the majority of the game.

Malroth initially appears as an amnesiac humanoid, differing from true humans by his elongated pointed ears and bright red eyes, on the Isle of Awakening. Malroth decides to accompany the Builder after being intrigued by the Builder's power to create items and materials, an ability he distinctly lacks. He also decides he has nothing better to do as he is unable to remember anything. During the course of his adventure with the Builder a friendship forms between the two. He also begins to hear an unidentified voice in his head attempting to guide his actions, similarly to how the original Builder in Dragon Quest Builders heard the voice of Rubiss.

Malroth grows more powerful the more the Builder creates. He begins getting intense destructive urges with his growth, causing him increasing distress, as he does not know the source of these desires. As his power swells, the voice in his head becomes progressively more active; its suggestions begin taking darker and darker tinges. Malroth is initially only mildly annoyed, but becomes increasingly concerned by being called the "Master of Destruction" and suggestions of murdering the Builder. Despite the increasing severity, he attempts to keep the incidents with the voice in his head mostly to himself.

Troubled by being unable to create, he begins valuing himself purely on his ability to destroy objects and defeat monsters to help the Builder. This attitude on his self-worth eventually festers and twists into resentment when the Builder starts constructing traps and other devices that he thinks he is being replaced with. This festering, and the fact that his desire for destruction grows as the Builder builds, is what allows Hargon, the owner of the voice Malroth had been hearing in his thoughts, to override the personality his human form has developed and begin his transformation into his true form as the Lord and Master of Destruction.

Hargon also reveals the world that the Builder and Malroth have been exploring is nothing but the lingering illusion created by himself; even Hargon himself is surprised that the illusory world has persisted after his death in the real one.

Malroth's sentimentality for the Builder remains even after he attains his true form; this is demonstrated when he intentionally avoids destroying the first item the Builder ever made for him: a simple Oaken Club. Despite his threatening speech, wherein he says that he will devour the Builder as a "reward" for the happy memories they shared, he, literally using one set of arms to restrain the other, holds himself back during the battle. Upon his defeat he comments that the Builder is much stronger than the last time they were together and is happy that the Builder's promise to stop him if he changed for the worse was kept. His high-fiving habit proves strong enough that he even raises a shaking claw to receive a high-five from the Builder after being defeated.

Malroth splits into two entities after said high-five. The humanoid Malroth, with his memories and sentimentality, is ripped from the rest of him, allowing the destruction-seeking Malroth to arise at full power unrestrained. After the Master of Destruction leaves, the humanoid Malroth is left with an injured Builder. Out of desperation, he repeatedly attempts to concoct medicinal herbs and is eventually successful, marking his first act of creation. Malroth then assists the Builder in defeating Hargon his other half, Malroth then re-absorbs the power said half took from him. Using his newfound godlike powers, he transforms Hargon's world of illusions into a real world to prevent it from fading away. Upon completion of stabilizing the world, Malroth appears to revert to a mostly powerless state and stays with the Builder on Awakening Isle.