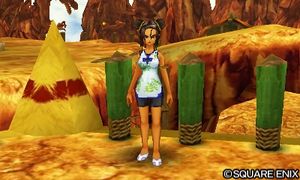 The Mandarin dress is a special piece of clothing introduced in the 3DS version of Dragon Quest VIII: Journey of the Cursed King. It is an Eastern-inspired garment that provides a significant boost to the wearer's Agility and maximum HP.