Difference between revisions of "Mighty armlet" 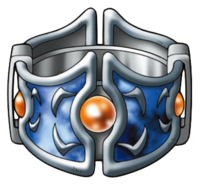 The Mighty Armlet is a recurring accessory in the Dragon Quest series.

The Might Armlet is available in the remakes of III, and increases attack by 15. Wearing it changes a character's personality to Paragon. The armlet is found in Aliahan castle behind a magic key door.

The Mighty Armlet is an accessory that increases strength by 25. It is found in Zenithia, the entrance dungeon to Nadiria, and the reward for 47 mini medals.

The Mighty Armlet is an accessory that provides an attack boost of +15. It's a prize for winning the Strength category in Excellence Grading Organisation.

The mighty armlet provides an attack boost of +15. It is found in a treasure chest on an isolated plateau, the prize for winning rank D of the Monster Arena, and can be fused in the alchemy pot by mixing a Strength ring and Titan belt.

The armlet can be used as an ingredient for the Uber war hammer, Dragonslayer, and Gigant armour.

The armlet increases attack by 12, is found in the Realm of the Almighty, and is the reward for quest #128.