Difference between revisions of "Orgodemir"

Orgodemir (オルゴ・デミーラ, Orugo demīra) is the final boss and main antagonist of Dragon Quest VII. Known as the Demon King, he is the force behind all the evil that the Hero and his party encounter during the game. A villain with multiple forms, Orgodemir sought to replace the Almighty, and had nearly the entire world sealed away to keep his foe from being resurrected.

Long before the game begins, Orgodemir set out to seal all lands and cast them in darkness. He was opposed by the Almighty and the Four Elemental Spirits: Earth, Fire, Water, and Wind. The Almighty was defeated and the four spirits were scattered. However, the Almighty had put a system into place that would allow the world to be reborn again within the Shrine of Mysteries.

Orgodemir's true form is a monstrous demonic centipede with the upper body of a humanoid and draconic features. His head is enlarged, has a pair of large spikes on each side of it, and exposes his brain. His brain also has smaller spikes surrounding it. Orgodemir has three eyes with vertical pupils, pointed ears, a black spike on his chin, and a mouth lined with sharp fangs and a purple tongue. He has a pair of dragon wings on his back, a yellow bone-like structure which surrounds his torso, and a section on his chest similar in appearance to a rib cage. His lower back is covered in dorsal fins and small black spines, ending in a long black spike. The underside of his lower body is yellow. Orgodemir moves about by crawling on his various legs in a fashion similar to real-world centipedes. In the past, most of Orgodemir's body is beige, he has yellow eyes, his brain is red, the webbing on his wings is orange, and his chest, legs, and various spikes are all purple. In the present, most of Orgodemir's body is dark green, his eyes are red, his brain is purple, and the spikes on his body are black. In both of his forms, Orgodemir has long, sharp nails on his hands, which are purple in the past and black in the present.

Orgodemir can also disguise himself in a humanoid form, retaining the pair of wings on his back along with his three eyes and long, pointed ears (however, the shape of wings differs rather noticeably, from ones of his real form). His skin is now pale green and his exaggerated facial features are meant to be physically attractive. He wears his silver hair in a long, slick forelock falling over his face. His eyes are white with red pupils and he wears dark blue eyeshadow on all three of his eyelids, as well as dark purple lipstick. Orgodemir wears a red-lined suit with a coattail and puffed sleeves that exposes most of his chest, a leather codpiece with a skull belt around his waist, and leather shoes with steel tips. He also wears an extensive amount of jewelry, including a single black hoop earring on his right ear and numerous earrings on his left ear, a leather choker and chain necklace around his neck, and various bones on his fingers. In the past, the suit he wears is red and the webbing on his wings is orange, while in the present he wears a purple suit and the webbing on his wings is green.

Although Orgodemir himself does not make an appearance until late in the story, his presence is felt throughout the various worlds the party visits. At Ballymolloy, the warrior Maeve is twisted into a monster by a mysterious evil voice. The Tinpot Dictator invades the land of Faraday with an army of Automatons on the orders of the Demon King, aided by the Slaughtomaton. At Alltrades Abbey, Cardinal Sin and his monsters concoct a devious plan in order to strengthen the Demon King with the stolen abilities of adventurers hoping to change their vocation there. In the land of Al-Balad, a group of monsters led by Setesh the Punisher forces the people to construct a monument in the likeness of the Demon King.

The kingdom of Buccanham is the only nation to pose a serious threat against the Demon King's reign. A band of pirates, led by Captain Sharkeye, braves the seas in their ship, the Sea Dragon and fights battles against the Demon King's monsters. However, their victories are short-lived, as Orgodemir encases the ship and its crew in ice, putting a stop to their heroics. The Demon King then places a curse on the kingdom of Buccanham, causing its newborns to be transformed into monsters on the first night after a full moon.

The Hero and his party travel to the past through the Excavated Cave underneath the Dig Site. After placing Mysterious Fragments into the pedestal there, they are transported to the Malign Shrine. They witness the Almighty sealing away Sir Mervyn in the Sizzling Stone and His defeat at the hands of the Demon King. After traversing through the stronghold, they encounter the Demon King himself. Orgodemir taunts the party by saying they are foolish to throw their lives away for the sake of the Almighty. He even allows them to walk away. However, if the player refuses, Orgodemir will fight the party.

When the player defeats Orgodemir, he tells them that although they were able to defeat his body, his soul will never die. With that, he disappears, ending Disc 1.

In Disc 2, the party reunites with the present day Roamers in their ceremony to revive God. With Aishe dancing in the Vestment of Virtue and Crispin playing the Torban of Truth, the Almighty is revived. However, unbeknownst to the party, this is really Orgodemir in disguise. As the Almighty, Orgodemir thanks the party for reviving him and tells them that he will issue peace to the entire worlds.

Months later, Orgodemir, disguised as the Almighty, has the populace of the world build him a palace at the center of the world known as the Cathedral of Light. Sir Mervyn has been working with him as part of security. After its completion, he invites representatives from all nations to hear him speak. He tells them that he is the Almighty and that evil has been defeated. He instructs them to do dispose of their weapons as they will have no need for them and not to take the life of a human or a monster. Orgodemir, as the Almighty, then asks the Hero to give him the Dark Ruby as it is evil. With this, the audience with The Almighty is finished and he disappears. As the Hero's Party leaves the Cathedral of Light, they see Mervyn being chased by soldiers, claiming that he has committed treason against Him.

As the party leaves to return to Estard, the land is sealed once again and thrown into darkness. This is the work of Orgodemir. Mervyn communicates this to the party via Mindspeak. He tells the party that the Almighty went about sealing the worlds that he said were evil. When Mervyn questioned this judgment, he was called a traitor. However, he learned of the four Elemental Spirits and they are the only beings able to shed light on the Almighty's actions. When the party awakens the Fire Spirit, they free the Sea Dragon and its crew from their icy prison, allowing Sharkeye and his band of pirates to assist the party's battle against the Demon King.

With their victory, Orgodemir wonders why he was defeated and postulates the party is actually the Almighty. Orgodemir's final defeat brings peace to the world. 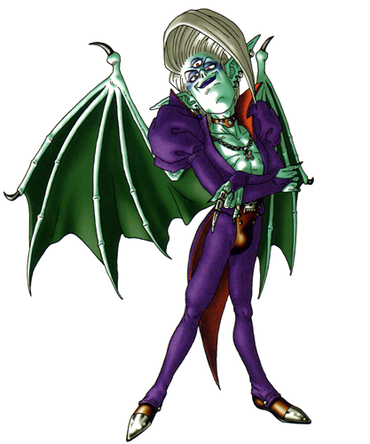 Outside his main role in Dragon Quest VII, Orgodemir also makes appearances in the following titles.

Orgodemir appears as a Legacy Boss, obtained after completing Quest #176 (or received at special events). He will become enraged once his health drops to orange range.

Orgodemir is a Rank X monster in Dragon Quest Monsters: Joker . He can be synthesized by mixing Mortamor and an alabast dragon.

Orgodemir is a Rank X monster in Dragon Quest Monsters: Joker 2. He has the same synthesis recipe as in the previous game.

Main Series
Underlings
Other
Dragon Quest VII: Fragments of the Forgotten Past