The Princess of Moonbrooke is a character in the Dragon Quest series that appears as a playable party member in Dragon Quest II: Luminaries of the Legendary Line. She is a descendant of Erdrick who inherited none of her ancestor's physical strength but makes up for it with her magical prowess.

After Hargon attacks Moonbrooke, the Princess of Moonbrooke is cursed and turned into a dog. Later, after her cousins the Prince of Midenhall and the Prince of Cannock break the curse, she joins forces with them to exact revenge on Hargon for what he did to her subjects and her father.

She is depicted as shorter than her cousins, by how much depending on the illustration. She alternates between having blonde and lavender hair, and is clothed in a white robe and purple or red hood with Erdrick's crest on the forehead, carrying what looks to be a wizard's staff in the Japanese version of the game. Her eye color changes between lavender, red, and blue, as well. In the American illustrations for the NES version of the game she is tall, blond, and wears a pink and black robe, knee-high black boots, red cape and holds the lightning staff. When cursed by Hargon, she took the form of a brown dog.

The princess is first seen in the opening cutscene, and is encountered in person in Moonaham. Unable to communicate with her cousins due to her curse, she follows them around as a party member anyway as head's up to new players that the dog is more than it seems. After getting hints from the townsfolk of Moonaham, the two princes find the Mirror of Ra in a swamp east of the ruins of Moonbrooke. Returning to the village, the mirror is used on the princess and she is restored. 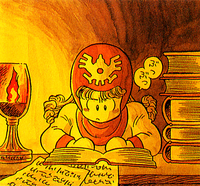 On May 27, 2011, the Princess of Moonbrooke began appearing as a special guest under the name of Princess Princessa at the Quester's Rest in Stornway. This could be downloaded through the DQVC using Nintendo's Wi-Fi channel when it was still available. When spoken to, she will give the Hero different pieces of her outfit is certain conditions are fulfilled.

The player will receive the Accolade Moonbrooke Maiden if the Hero wears all of the parts of the Prince of Moonbrooke's costume.

Dragon Quest of the Stars[edit]

The princess is a playable ally who encounters Cyril during the the II scenario quest. She first appears in her cursed form and is illustrated with blonde hair, but has lavender hair in her polygon model.

Her outfit and staff is available as a drop in most Dragon Quest II missions.

The princess is a playable character in the game, being introduced alongside her cousins in the "Triumph of Heroes" card pack that was released after the game's title changed to Dragon Quest Rivals Ace. She is featured on three different cards.

The princess is a playable character and a rank C opponent.

The Princess of Moonbrooke appears as part of the Dragon Quest II event that began on May 27, 2021. She can participate as a helper after clearing Chapter 2, Episode 2 of the event and her outfit can be purchased by exchanging gold pass medals.

The Princess of Moonbrooke is called Peronel and she appears as an S-rank member of the Hero family as part of the limited Dragon Quest II event on her own banner alongside Orc king. Peronel also appears as a boss in the special Luminaries of the Legendary Line boss battle with Rickerd.

The fair princess introduces several firsts to the Dragon Quest series, such as being the first heroine to join the protagonist, the series' original dedicated spell-casting character, and the first to endure the destruction of their family and home. Such a melancholy fate would become the series' standard, with only a scant few lead characters avoiding the trend.