Difference between revisions of "Psaro (Character)"

This article is about the character, for the enemy form see Psaro the Manslayer

Psaro the Manslayer is the central villain of Dragon Quest IV: Chapters of the Chosen, and a recurring monster in the series. He is a powerful demon with a passionate hatred for humanity.

During his rise to evil, Psaro attempted to kill the hero, sought the secret of evolution, and searched for the resting place of Estark, Ruler of Evil. Enraged by the death of his beloved, Psaro became Psaro the Manslayer.

Psaro at first appears fairly humanoid, though his red eyes, pointed ears, and vast powers would soon reveal him for what he really is. He has long silver hair, pale skin and wears a dark, baroque-styled outfit with a single distinct shoulder pad, spiked and appearing to be made of bone, and a long fur cape. He also has a single, long strand of hair sticking up out of the top of his head, known as an ahoge. Upon using the Secret of Evolution he turns into a likeness of Estark and steadily morphs into a vicious, horned demon with a second face on his torso as the player fights against him.

Psaro loathes humans, his Manslayer title likely derived from his stance on human presence. Despite this intense hatred, Psaro is remarkably kind to other beings, notably monsters and especially the elf Rose. His romantic attachment to Rose is so strong that it drives him insane when he learns of her murder and can be freed from the Secret of Evolution's maddening power if she is revived and brought before him.

In the Japanese and Cell phone remakes, Psaro has a personality which is known to be tsundere if party chat is used while he is in the party. He usually does not appear to be interested in speaking to his new comrades, usually expressing annoyance if attempting to do so. Nevertheless, Psaro will express both remorse and gratitude when due, such as when visiting the Hero's hometown and Roseville. 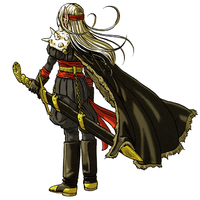 Psaro is mentioned in every chapter, and his actions drive the game's plot.

In the first chapter, Psaro sends his minions to kidnap the children of Strathbaile in search of the child that is prophesied to stand against him one day. Ragnar fights the leader of the kidnappers, Psaro's Pawn as a final boss to this chapter. Unbeknownst to Psaro at the time, he had the wrong location and thus the plan never had a chance of succeeding.

In the second chapter, Psaro is the top contender in the Tournament of Endor. He gains infamy throughout the kingdom by being known to fight his battles to the death rather than for sport. Additionally, his motive for participating in the tournament is in hopes of finding The Hero.[1] During this time, Psaro is made aware of the Tsar of Zamoksva having had a vision of the Lord of the Underworld unleashing havoc onto the world. To silence him, Psaro has a curse cast onto the Tsar, taking away his voice. However, the Tsar's voice is returned to him by his daughter who lifts the curse with Birdsong nectar. Due to this, the Tsar is able to deliver his vision to at least his daughter and her comrades. Later, Psaro is supposed to be Alena's last opponent in the tournament, but fails to show up. This disqualifies him and makes Alena the victor. It is highly implied that during this time, Psaro took off to Zamoksva to silence the Tsar once and for all, which ended up causing the entire kingdom's citizens to disappear.

In the third chapter when Torneko arrives in Endor, the tournament and Psaro are mentioned by several townspeople in hushed breath, and in the fourth, after the sisters Meena and Maya defeat Balzack, the Marquis de Leon appears stating that Psaro will not be happy about it, and then easily defeats the sisters.

The fifth chapter starts with Psaro leading a group of monsters into the hero's Hometown and killing everyone except the hero. After this he desires to resurrect Estark. When Estark's Crypt is discovered by the miners in Mamon Mine, Psaro leads a group of monsters from the Diabolic Hall to the mine. He is successful in resurrecting the ruler of evil, but The Hero and his party are able to defeat Estark. Next, scenes of Psaro are seen in a dream sequence if the player stays in Strathbaile's inn.

In the remake-exclusive sixth chapter, the players hear word of a legendary bloom of the world tree that can fully revive the dead. Setting out to find the bloom, the Chosen use it to revive Rose. Aware that she was murdered at the order of Aamon, she insists that she accompany the group to Nadiria to stop her lover. When she confronts the hideous form Psaro has become, the Secret of Evolution is undone by her tears and Psaro is returned to sanity. After being informed of Aamon's conspiracy, he joins the Chosen as a playable character.

Psaro's initial state is quite powerful; he starts at level 35 and all his stats are high, not to mention he can learn powerful spells such as Lightning Storm and Magic Burst (most of which originally premiered in later Dragon Quest installments.) If the player chooses to pursue the bonus content and make Psaro an ally they will quickly find that he is more than a jack-of-all-trades, being adept at healing, support, and especially offensive abilities. If the time is taken to level him up he will swiftly become the most powerful ally in the game. He can furthermore equip cursed equipment without penalty and without having his stats zeroed.

Psaro appears alongside Rose in the near-future version of Reaper's Peak. He is confrontational when spoken to, accusing the Hero of wanting to kidnap Rose for her tears before backing off and telling him to leave them in peace. 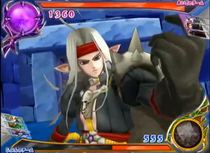 Psaro appears as a playable character, as well as the boss for Legend Quest IV in Chapter 7: The demon Lord.

After the hero of Monster Battle Road Victory wins over his/her rival Ryuuta, Psaro escapes from the game world to the real world to challenge the hero. After clearing the game, he will be at the harbor waiting for the hero to challenge him again.

Psaro is a secret playable character in the game. In the original Japanese version, he is part of the downloadable content but he is included by default in international versions of the game. In order for Psaro to join your party, he must be beaten in battle in the quest "A Monstrous Apparition", which can be undertaken after defeating the Barbatos at Yggdrasil. Before that, Psaro will appear as a "Mysterious Swordsman" who randomly appears in a few levels before disappearing. His reasons for joining the heroes are personal, as he wants to take revenge on Velasco for taking advantage of his monstrous brethren and end the curse placed on them.

Psaro wields greatswords in combat and uses a combination of Zam magic and martial arts. For his Coup de Grâce, Psaro uses the Secret of Evolution to transform into his demonic form and blasts enemies. Due to his status as a secret character, Psaro will not appear in cutscenes and he has no impact on the main storyline.