Difference between revisions of "Ragnar McRyan"

"Wheesht! A wee nyaff like you cannae stop the mighty Ragnar McRyan!"

—Trouncing the guards at the Palais De Leon

Ragnar McRyan is the first character that the player controls in the original version of Dragon Quest IV (second in the remakes as the prologue lets you play as The Hero). A soldier of the Kingdom of Burland, Ragnar is sent to investigate a case of missing children in the village of Strathbaile.

Discounting the prologue, and the fact that all main characters are present in Chapter Six, Ragnar is the only member of the chosen to make cameo appearances in multiple chapters.

Ragnar is a very physically fit man with a lean build that belies his immense strength. He has tanned skin and dark blue hair, with a stern appearance and a large bushy mustache. He wears a pink breastplate with a long red cape attached and a leather skirt called a pteruges over a blue undershirt and shorts. His helmet is pink with a red plume and he wears pink gloves and pink shin guards over a black pair of boots. Ragnar also wears a metal armband on his right bicep, two metal bands on his thighs, and a single metal pauldron on his left shoulder. His armour is reminiscent of the kind used in Ancient Rome, particularly his Legionnaire helmet.

Naturally, he is far more concerned with improving his skill at arms than with scholarly pursuits. He is quite a compassionate person, as evidenced by his righteous fury against the demonic kidnappers and willingness to befriend an innocent monster when most would slay it. Ragnar's fellow soldiers look up to him with admiration and respect, and even the king places the utmost confidence in him. Though Ragnar takes great pride in his strength and skill, he is a humble man at heart and places the safety of others above all else.

Starting with the DS remake, Ragnar speaks with a Scottish accent (ex: "Och no! Hoo'd I manage tae get scrabbed right on the end o' ma couter?").

Ragnar's chapter begins with him receiving a summons from the King of Burland. As the children of Straithbaile have vanished, all soldiers of the kingdom have been tasked with investigating the incident and rescuing the children as soon as possible.

After speaking with the people of Burland and venturing through the underground passage to Straithbaile in the north, Ragnar encounters the amnesiac Angus in the town jail. Reduced to the mental ability of a child due to a tremendous shock, Ragnar returns to Burland and brings Angus' wife Aigneas to return the man to his senses. As Angus had been welcomed by the children of Straithbaile as one of their own when he had toys in his attic, he tells Ragnar of their playing place near the Auld Well.

Entering the well and exploring it, Ragnar hears a mysterious voice that leads him to the Talaria boots that will allow him to reach the top of the Loch Tur and rescue the children. Ragnar is also able to join forces with Healie the healslime in this cave, who seeks to become human one day and wants to help the soldier on his mission. With healie in tow and the Talaria flinging them both to the Tor, Ragnar makes it to the heart of the fortress and confronts the demon responsible, who unveils the Underworld's master plan of killing the Chosen before he can ever rise against their Lord. Ragnar kills him and rescues the children, winning the favor of the entire country.

Despite the accolades he receives, knowing the Underworld's plan Ragnar reveals he cannot simply stand by as darkness gathers, and sets out on a quest with Healie to find and protect the hero.

Ragnar makes cameo appearances during other chapters before the unifying of the Chosen in 5. In chapter 2 he is in the Endor Shrine at night. In chapter 3 he can be found in the casino at Endor in which he is looking for The Hero. By chapter 5, his search took him to Mintos where a couple of residents would relate his visit to The Hero.

Sometime after, Ragnar headed to the House of Prophecy to learn more about The Hero, but diverted from that search when learning about the corrupt King of Palais de Léon from a prisoner at Havre Léon.

He arrived at the castle with the now-human Healie just before the other Chosen, and he is seen dispatching the hapless guards trying to prevent him from entering the Maquis' chambers. After the Marquis is defeated by the Hero's party, Ragnar joins forces with the hero.

After the downfall of Psaro the Manslayer, Ragnar reported the victory to the King of Burland and later visited the Hero in the Hidden Valley with the rest of the party. 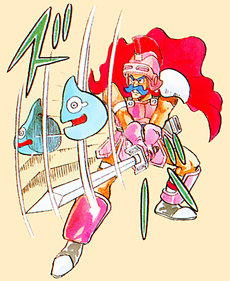 When applied to the Dragon Quest III class system, Ragnar is a warrior. He has immense strength and resilience, but low agility. Even his character design is a variation of the warrior, which was traditionally in pink armour. He can don nearly all available armour and use most weapons, and should be on the frontlines of battle at all times--his endurance growth is so great it is advisable to set him at the head of the party until the hero obtains the zenithian equipment.

Ragnar appears with the other Chosen in the near-future version of Reaper's Peak. He is found in the weapon shop, trying to get a replacement for his broken sword. He is annoyed with the cat running the store for not stocking any swords at all.

Ragnar appears as one of the monster team owners at Morrie's Monster Arena. His team includes a Healslime, a Dullahan, and a Gigantes, which are called "Healie's Heelies," a homage to his partnership with Healie.

Ragnar appears as one of the special guests at the Quester's Rest in Stornway. This could be obtained through the DQVC using Nintendo's Wi-Fi Channel when it was still available. When spoken to, he gives the player different pieces of his outfit depending on different situations, such as talking to him as a Warrior.

Stella does not have a high opinion of Ragnar when speaking to her through the battle records screen.

Ragnar appears as an exclusive playable character in the Nintendo Switch version. As a reference to his partnership with Healie, Ragnar teams up with Healix in his Coup de Grâce attack.

Along with Torneko, Kiryl, and Alena, Ragnar appears as a playable character in Itadaki Street Special.

Ragnar is a name of Norse origin, meaning warrior of judgement.