Difference between revisions of "Ranger" 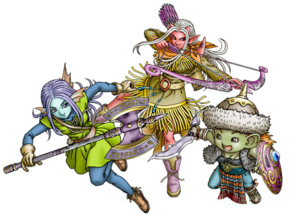 The Ranger (レンジャー, Renjā) is a recurring, nature-themed vocation in the Dragon Quest series. Eschewing the typical Robin Hood designs seen in other games, DQ rangers are modeled after the inhabitants of the great Steppes such as the Mongolians and American Indians.

The Ranger's statistics vary from game to game. In Dragon Quest VI, the Ranger increases Agility and Wisdom and gives the party an increased chance to flee from battle at higher ranks, though it decreases several other attributes as well. In Dragon Quest IX, the Ranger is most Deft of all vocations, and serves as a physically oriented jack-of-all-trades by providing buffs, healing, and above-average damage output even from the back row. Though the vocation's only high stat is deftness, their tool-set is broad enough to cover a wide variety of circumstances while providing relief for the party's main healer, and also inflict tremendous damage through the powerful Wolf Whistle skill.

A character requires mastery of the Merchant, Thief and Monster Master vocations to become a Ranger. Becoming a Ranger allows a character to flee battle more easily at higher ranks. Note that vocation flee rates stack with base encounter flee rates; I.E. being at rank 1 does not cut the base chance in half.

The Ranger vocation does not appear at all in either version of Dragon Quest VII; due to a localization error, the Armamentalist vocation was dubbed the Ranger in the PSX script.

The Hero must finish the quest Ranger Changer to unlock this vocation. By talking to a person at the base of the Heights of Loneliness, the player can accept a quest which involves poisoning Hocus Chimeras and then letting them die by poison, nothing else. After doing this 3 times, the ranger vocation is unlocked. 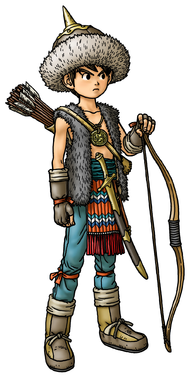 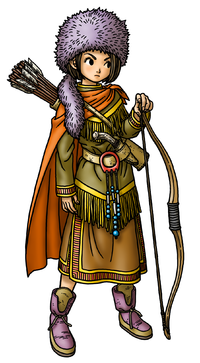 Rangers have the unique skillset Ruggedness, and can also use skill points to learn Axe, Bow, Boomerang, and Fisticuffs skills. Their Coup-de-Grace is "Brownie Boost," which increases attack, defense, and applies Insulate.