Roamer Equipment consists of various items, weapons and armour in Dragon Quest VII. They are the sacred treasures of the Roamer tribe, and play a vital role in their holy pilgrimage.

This sword sometimes sends targets into a trance-like dance. (Description of the Sword of the Roamers in the Nintendo 3DS Version of Dragon Quest VII.) 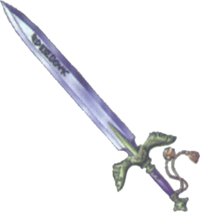 The Sword of the Roamers (formerly Deja sword), is a sword that appears in Dragon Quest VII. It is an important weapon of the Roamers tribe, wielded by many generations of Guardians.

The sword has an attack bonus of +90, a style bonus of +45, and has a ⅛ chance to make the target lose their turn by making them dance. It is part of Aishe's initial equipment when she joins the party, but it can also be equipped by the Hero and Sir Mervyn. It cannot be sold.

The sword of the Roamers is the traditional weapon of the Guardian of the Roamer tribe. According to Aishe, it was originally found by the most famed Guardian of their tribe, a heroic prince from a faraway kingdom. It has been passed down from Guardian to Guardian for many generations. Aishe has inherited the sword, but she kept it hidden away from rest of the Roamers, as they are uneasy with her proclivity for fighting. Before setting off on the quest to find a worthy Torban player, Aishe visits the grave of her parents and takes the sword with her.

This garment will help to reduce damage caused by magic. (Description when selecting the Vestment of Virtue in the Nintendo 3DS Version Dragon Quest VII.) 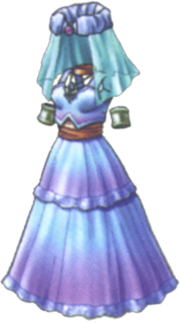 The Vestment of Virtue, (formerly Innocent Dress), is a special set of clothing in Dragon Quest VII. It is a sacred garment reserved for the tribal dancer of the Roamers tribe.

The Vestment of Virtue has a defence bonus of +30 and a style bonus of +45 and reduces damage taken from non-Zap spells by 15. It can be worn exclusively by Aishe. As it is an important item, it cannot be sold to any shopkeeper. It is obtained when the party visits the Divine Shrine.

The Vestment of Virtue is first mentioned when the party travels back to the Roamer Encampment in the past. In order for the ritual of Restoration to revive the Almighty to succeed, the chosen dancer must dance while wearing the Vestment of Virtue and while the chosen torban player performs with the Torban of Truth. After the party and Florin drain the lake, the Torban of Truth and the Vestment of Virtue are found and shown to Rom Baro, who tells them it is not yet time for the Restoration to take place. However, Florin insists on going ahead with the ritual anyways, as he wants to be free of his destiny as a Torban player. The rite is performed by Lala and Florin, but nothing happens. Florin confesses that he too bears the same mark as Lala, meaning that he cannot marry her. After the ritual, both the Vestment and Torban are left in the Altar and Florin departs from the clan in shame.

An ancient instrument with the power to revive The Almighty. (Description when selecting the Torban of Truth in the Nintendo 3DS Version Dragon Quest VII.)

The Torban of Truth (formerly TerraTula), is an instrument that appears in Dragon Quest VII.

??? (Description when selecting the Chimes of the Chosen in the Nintendo 3DS Version Dragon Quest VII.)

The Chimes of the Chosen (formerly TerraBell), is an item that appears in Dragon Quest VII.

The chimes are given by Rom Baro to The Hero and Party to drain the water of Poolside Cave in order to continue with the ceremony to revive The Almighty. They also allow crossing of gaps within the cave by creating a bridge of sorts.

A glass goblet filled with a traditional Roamer draft. (Description when selecting Spirit of the Dance in the Nintendo 3DS Version Dragon Quest VII.

The Spirit of the Dance (originally VivaGrape), is an wine that appears in Dragon Quest VII.

The Hero, Maribel and Ruff pick some upon within the camp for Lala at Kiefer's insistence.