Difference between revisions of "Romaria"

Romaria (previously localized as Romaly) is a castle-town located in the overworld of Dragon Quest III. It is visited early in the game, shortly after completing the Path of Promise. It is the first "mainland" location visited in the game, as well as the series' introduction to non-slot machine gambling.

Romaria is a roman-esque castle-town that serves as the first location in a Dragon Quest game which features a Monster Arena where the player can gamble on enemy monster battles. Even if the player is unlucky, the arena can prove useful for observing the capabilities of the nearby monsters, as well as imported ones from later in the game.

Romaria is the focal point of the King's crown subquest. Upon first arrival, the King of Romaria will request the heroes retrieve his stolen crown from a group of bandits. These bandits are Robbin' 'Ood and his henchmen who are headquartered in the nearby Skyfell Tower. By defeating the bandit, the heroes can return the crown to the King or use it as a helmet for their own. If returned, the King will abdicate the throne in the Hero's favour. However, in order to continue the quest, the Hero must speak with the former king in the Monster Arena and remind him of his duty as a king.

This location includes a casino or other gambling facility.

This is a location where the game can be saved. 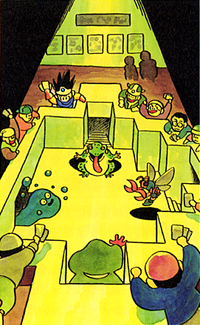 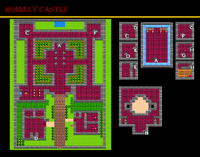