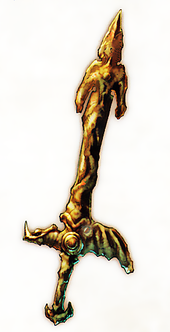 The Rusty Sword (sometimes Rusty Old Sword) is a weapon in the Dragon Quest series. Though not very serviceable in its current state, it can be refurbished into something truly remarkable...

The rusty sword only has an attack bonus of +63. After it is refurbished in Turnscote, it becomes the Sword of Ramias.

The rusty old sword only has an attack bonus of +45. It can be restored into the Liquid metal sword via alchemy pot. One can be found at the Trodain castle, after getting the Ultimate Key.

The Rusty Sword is found in the Realm of the Mighty. It can be refurbished into the legendary Erdrick's sword. While not available in shops, it was available as a DQVC item during the last part of June 2011.

This sword can be tempered into the Metal King Sword.