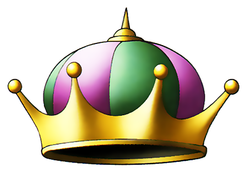 The Slime crown is a recurring item in the Dragon Quest series, based on the crown worn by King slimes and related Slime family. It's gold-brimmed with green-purple fabric. While it can be worn as a helmet, it is an ingredient of many powerful items when combined with other alchemy ingredients, especially Orichalcum and Gold bar.

In the Nintendo 3DS port of Dragon Quest VII, the Slime crown is reward upon the first completion of the DLC Tablet The Test of Slime by defeating Hammer.

The Slime crown has a Defence bonus of +31, as well as Style bonus of +24, and can be equipped by anyone.

A Slime crown can be found inside the well in Hilltop Hut and inside a barrel in Tryan Gully. It can be also dropped by King slime (Rare drop, 1/256) and Metal king slime (Common Drop, 1/128), but not King cureslime. As an alchemy ingredient, it is used in recipes to make Metal king armour, Liquid metal sword, and King axe.

In the Nintendo 3DS Version, a second and third crown are found in a chest in the room following Great Argon Lizard in Memoriam in Memories Lane and from completing the the Killing Machine Card of Cameron's Codex, respectively.

The Slime crown itself has a Defence bonus of +20. It can be worn by Yangus and Morrie.

A Slime crown may be found in the ruins of Gerzuun. When the DQVC was still running, Slime crowns were purchasable, particularly during the Slime Sale and Metal Slime Time weeks. They are useful for ultimately upgrading the Metal slime equipment into metal king equipment, as well as other kingly-themed pieces of equipment.

The Slime crown loses its status as a piece of equipment, but is still used in various recipes for the Fun-Size Forge.