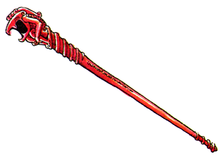 The Staff of sentencing (also known as staff of judgement, Staff of jubilation or Judge staff in the GBC Version) is a weapon in Dragon Quest III and Dragon Quest XI.

The staff has an attack bonus of +35 (+37 in the GBC Version), and can be wielded by Priests and Sages. It has the effect of Infernos when used as an item in battle.

The staff of sentencing has an attack bonus of +23, a magical might bonus of +21, a magical mending bonus of +10, and an mp absorption rate of nine percent at its base level. When used as an item, it can deal wind damage to a group of enemies. It can be purchased from the Puerto Valor casino for 7,500 tokens. Veronica and Rab can equip it.