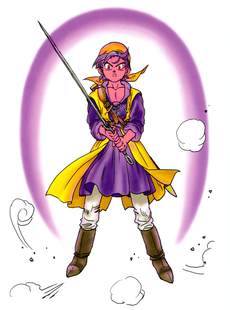 DQVIII's Hero in a state of High Tension

Tension is a status effect in the Dragon Quest Series. It was introduced in Dragon Quest VIII and surrounds the user in an aura of malice, multiplying their strength for the next attack.

In previous Dragon Quest games, there were skills that can increase damage on the next attack such as Focus Strength. These skills would only affect the user for one turn, and could not stack with successive uses.

Tension is a state of building up power to unleash in a future action. In Dragon Quest VIII, every party member has an battle option called Psyche Up found at the bottom right of the battle menu. This allows the player to take a turn to build up tension. The more times tension is built, the more powerful the next action will be. Tension applies to attacks and magic, but has no affect on skills that do no damage, nor is it depleted when using such skills, such as the Underpants Dance.

Once an action affected by tension (such as attacking or casting a spell) is performed, tension is returned to the normal level. There are four levels of tension, with each stage giving a specific damage multiplier bonus:

Assume Angelo is in a state of 50 tension and uses the Multiheal spell which normally would heal 100 HP to everyone.

Therefore he would restore 500 HP to everyone.

Some enemies also have the ability to build tension, making them tougher in battle. Fortunately, monster tension is less effective than a human character's:

Using Psyche Up normally, a party member can reach 50 tension without difficulty. However, there is only a 1/3 chance to increase from 50 to 100 tension, wasting the turn if the transition is not made. Fortunately that party member will not lose the tension already accumulated. When a character reaches 100 tension, their polygon model will change to reflect their anger.

Other Ways of Building Tension[edit]

In Dragon Quest IX, the Hero has the ability Egg On, building another party member's tension level by one. The ability Feel the Burn, obtained by maxing out the Gladiator's "Guts" skill, raises tension whenever the character is hit while in effect.

There are limits to Tension. Tension does not carry over after battle ends, with one exception: in Dragon Quest IX, the the Martial Artist's Manual allows it to be retained as long as it is in the character's inventory.

Tension is lost if a character is put to sleep, paralyzed, cursed, disabled by something like War Cry, dispelled by Disruptive Wave, or defeated in battle.