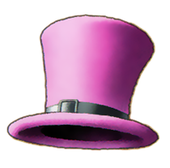 The top hat, also known as the silk hat, is a recurring hat in the Dragon Quest series. This formal headwear is reserved for men.

The top hat has a defence bonus of +20 and can only be equipped by male Merchants and Gadabouts. One can be found in a house at Greenlad and it can be sold for 900 gold, but it is not recommended to do so since there is only one in the game. It only appears in remake versions of the games.

The top hat has a defence bonus of +20. It can be purchased for 2,000 gold in Mostroferrato, Helmunaptra, and the Ventuno Treasures n' Trapdoors shop and sold for 1,000 gold. It is equipped by Sancho when he joins the party and it can only be equipped by him and some of the monster companions. Top hats can also be dropped by Blizzybodies and Cross bones.

The top hat has a defence bonus of +17 and a style bonus of +15. It can only be equipped by the Hero and Sir Mervyn. It can be purchased in Gröndal in the present for 1,200 gold and sold for 600 gold.

The top hat is part of the male Luminary's iconic attire.