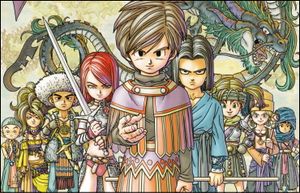 Unlike in III, this game starts with nine available classes. Each of the classes has eight ranks that can be reached by battling the required number of monsters, unlocking new abilities at each interval. Through mastering the initial jobs, advanced classes can be unlocked for that character which combine aspects of the prerequisites. For example, mastering the Warrior and the Martial Artist classes will allow the character to become a Gladiator. Skills and spells mastered in one profession are permanently learned by a character. Available vocations are:

The Hero class is open to all characters and monster recruits, but is most easily reached by the main character. Finally, the game has two secret classes, the Dragon and the Liquid metal slime--monster based professions which can only be accessed through rare scrolls.

Additionally, party members can also become monsters by using Monster Hearts. By putting a monster heart in their inventory and speaking to the abbot or High Priestess Jacqueline, they can become that monster. In the PSX version the character would not take on the appearance of the monster until mastering the vocation, where as they immediately become beastly in the remake. Furthermore, monster classes are the only way to permanently learn advanced skills and spells in the remake. In all, there are over fifty classes that a single character can become in VII. Beginner Human Vocations:

There are a total of 12 classes available in IX: