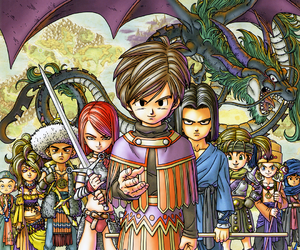 The vocation system is a recurring gameplay mechanic in Dragon Quest series that determines character growth and abilities. The basic concept of the system is that instead of having pre-determined skills and stats, player characters are blank slates whose growth, abilities and role are determined by the player's choice of character class. Each class, or vocation, grants different attributes and characteristics throughout the game. The mechanic is governed by a set of rules and requirements for changing a given character's vocation, which can vary from game to game.

Only certain games within the series use a vocation system, with others having traits permanently fixed to characters. The system is always tied to the Alltrades Abbey present in the respective games, wherein characters can switch professions or combine past experiences to unlock advanced positions.

Unlike in III, this game starts with nine available classes. Each of the classes has eight ranks that can be reached by battling the required number of monsters, unlocking new abilities at each interval. Through mastering the initial jobs, advanced classes can be unlocked for that character which combine aspects of the prerequisites. For example, mastering the Warrior and the Martial Artist classes will allow the character to become a Gladiator. Skills and spells mastered in one profession are permanently learned by a character.

Additionally, party members can also become monsters by using Monster Hearts. By putting a monster heart in their inventory and speaking to the abbot or High Priestess Jacqueline, they can become that monster. In the PSX version the character would not take on the appearance of the monster until mastering the vocation, where as they immediately become beastly in the remake. Furthermore, monster classes are the only way to permanently learn advanced skills and spells in the remake. In all, there are over fifty classes that a single character can become in VII.

Vocations can be changed at the Alltrades Abbey, after the player has rescued Abbot Jack. There is no minimum level limit for changing classes, dubbed re-vocating. One notable difference from past games is that spells are no longer carried over between class changes. A character must be a specific class to use that classes spells. Skills do carry over, and there are also methods for utilizing each weapon type with all classes.