Difference between revisions of "Warrior" 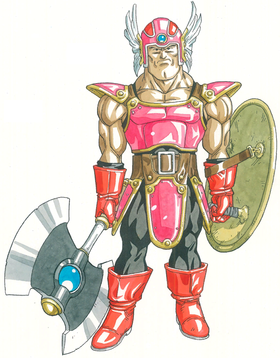 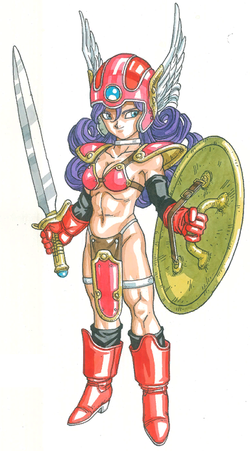 A master of weapon-based combat, able to learn a variety of cutting-edge sword techniques --Description from Dragon Quest VII

The Warrior (戦士, Senshi) is a character class in the Dragon Quest series. Warriors typically have high HP, Strength, and Resilience, but low Agility, and also have no magical capability whatsoever.

Warriors specialize in armed combat in battle, being capable of wielding the strongest weapons and wearing the heaviest armor, shields, and helmets available. They boast incredible growths in Strength, Resilience, and maximum HP, but are often the slowest party member in the group: it would be a wise idea to have them equip Agility-boosting accessories whenever available to keep them on par with other party members. Warriors typically share most of their equipment choices with the Hero, as well as having access to some weapons that are unique to them such as heavy axes and hammers. They will sometimes forgo weapon accuracy in favor of wielding weapons that have a higher chance of inflicting critical hits, such as Hela's Hammer and the Headsman's Axe. Warriors are sometimes troublesome to the party's finances, as it can quickly become expensive to keep them equipped with the newest and best equipment in each town.

Warrior is once again one of the basic vocations available after the events at Alltrades Abbey. Mastering it is a prerequisite to unlock both the Gladiator and Armamentalist vocations. In the 3DS version, the outfit for Warriors is very similar to those seen in IX

The Warrior is a useful class to become because of the strength increase that it affords. Among the skills that the warrior learns, Hatchet Man is by far the most useful. Although it misses half the time, when it does connect it will always be a critical hit, making short work of Metal Slimes. The Dragon Slash is also good for dragon bosses that the player encounters.

For hybrid skills, the two most useful ones are Sword Dance, which requires both a mature warrior and a mature Dancer, and Kelpto Clobber, which requires a mature warrior and a mature Thief. Sword Dance attacks four times with 0.75% power, making it useful for boss fights as it will hit for 300% more attack power than normal attacks. It is also the most cost effective skill in the game as it doesn't require any MP to use. Kelpto Clobber is useful because it steals from enemies, making it a nice skill to have if the player is looking for a particular item. However, the chance of stealing is rather low.

Regarding evolution, the Warrior can combine the mastered Mage class and become an Armamentalist. The 'mentalist has access to some elemental slashes and the extremely powerful spell Kafrizzle. The Warrior can also combine the mastered Martial Artist class and become a Gladiator. The Gladiator has stronger attacks including Multifists. After the Gladiator class is mastered, the Gladiator can then become a Champion as long as the Paladin class is also mastered. The Champion has several powerful attacks culminating with Blade of Ultimate Power, a must for beating the final bosses in the game. 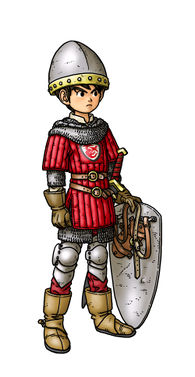 The Warrior Class is available at the start of the game and has the unique skillset 'Courage'. Warriors can also use skill points to learn Sword, Spear, Knife, and Shield skills. Their Coup-de-Grace is "Critical Claim," an attack that always lands a Critical Hit.