Watabou is a supporting character in Dragon Quest Monsters and currently a monster exclusive to games in the spin-off series. He is the guardian spirit of GreatTree and the monster that brings Terry to that kingdom in his debut appearance.

Watabou is a small, furry creature that carries traits similar to those of monkeys. He is primarily blue in color and has a ball on the end of an antenna sticking out the top of his head.

Watabou is a playful sort, if not also blunt at times. While he appears frequently through Dragon Quest Monsters, there is never much to discern from his character other than an abundance of optimism, even in the face of grim situations. 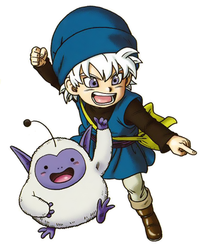 Watabou (called Watabou here) appears at the beginning of the game, looking for Terry's sister Milly. While distressed at hearing Warubou having gotten to her first, he allows Terry to follow him back to GreatTree so that he may become the monster master of the kingdom.

Watabou will appear whenever the player beats a boss monster at the end of a gate the first time, often giving a humorous quip before taking Terry back to GreatTree. The player can also occasionally meet him in the monster stables when they first become available. Watabou will be sitting at a wooden table while eating some meat, and will offer some to Terry if he continues to speak with him. After the player beats the game, they will get the chance to have Watabou join their team, though only after they have beaten all the bosses that stand at the end of each family-specific gate.

In his initial appearance, Watabou was a member of the plant family due to his being guardian of the massive tree the game takes place upon.

Watabou has been sealed away by Terry, who has been corrupted by jewel of evil. Before being completely sealed, he recruits Kleo to aid GreatTree after a misunderstanding of the youth becoming a Hero through the ordeal instead of a monster master.

Fluffy is a Rank X member of the beast family. He was only available via downloadable content in Japan.

The monster's first localization name is a direct adaptation of his Japanese moniker, with no modification for English speaking territories at all. With the overseas release of the second Joker game, the name Fluffy was used instead. Due to the difficulty of actually acquiring the monster, many fans were unaware of this change and continued using the original name.

With Seven Seas' publishing of the DQM+ manga in 2019, the Watabou term was revived. As the book is licensed through Square-Enix, this change was given full acknowledgement and approval by the company.