Whips are recurring type of weapon in the Dragon Quest franchise. When they were first introduced in the series, they were no different from other weapons and only attacked a single enemy.

However, starting with Dragon Quest V, whips gained the ability to target a group of enemies with each monster lashed taking less damage than the one before it. Whips tend to be favored by mages and thieves as a form of crowd control, and many female characters throughout the series are whip specialists. Only few monsters in the series use whips, such as Togres. 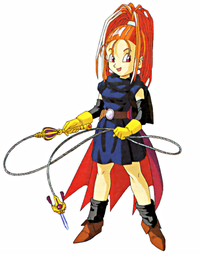 Beginning with Dragon Quest IX, whips will deal an extra 10% damage to members of the Humanoid family of monsters.

First introduced in this installment, whips could be used by the Hero, Mages, Gadabouts, and Sages, as well as Thieves in the remakes. Originally, the Thorn whip was like a normal weapon and only targeted a single enemy in battle. Remake versions of the game expanded the amount of whips in the game and added the ability to attack groups of enemies. They include:

Whips could be used by Bianca, Nera, and hero's daughter, as well as Debora in the DS and mobile remakes. The hero himself could equip a handful of whips. Whips gained their ability to target a group of enemies in this game.

Ashlynn is capable of equipping all whips in the game, while Milly, Nevan, Lizzie, and Goowain have a limited selection.

Maribel and Aishe are capable of using most of the whips in the game, but the Hero and Sir Mervyn could also equip a handful as well. They include:

Jessica can equip whips in all versions of the game, as can Red in the 3DS remake. Flails, which behave similarly to whips, became their own separate weapon type, used exclusively by Yangus.

Whips can be used by the Mage, Minstrel, and Luminary vocations. However, once a character fully masters the Whip skill, they can freely use whips with any vocation.

Whips can be equipped by both Veronica and Sylvando. Whips are two-handed weapons in this game, meaning that the user must forgo a shield if they wish to wield a whip; the user also cannot dual-wield them. Whips have the ability to attack every monster if they're in a group, and they deal extra damage to humans.

Whips are the main weapon of Jessica, much like in her original game.

Whips appeared as one of the weapon types in this game that monsters could equip. Whips can strike all enemies in combat at once.