The wizardly whip is a recurring whip in the series. It is a powerful weapon capable of attacking a group of enemies, just like most whips, and in some entries it deals increased damage to monsters of the Elemental family. 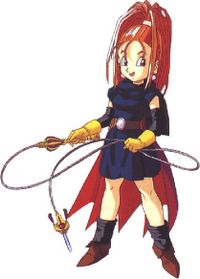 The wizardly whip has an attack bonus of +115 and a style bonus of +52. Maribel and Aishe can equip it as long as they are level 30. It is described as "a whip that really whacks elementals where it hurts." It was available as a special DLC item in the 3DS version after beating the Whipping Up a Frenzy tablet.

In the 3DS version, the wizardly whip has an attack bonus of +68 and deals increased damage against Elemental family monsters. It can only be equipped by Jessica and Red as long as they are at least level 30. The whip can be sold for 36,000 gold, but it is not recommended to do so as only one can be acquired in the game.

The wizardly whip was available through a special promotion for Japanese players that visited the real world Luida's Bar restaurant between August 29th, 2015 and September 30th, 2015, eventually becoming available for all players from November 4, 2015 and November 17, 2015. It was also available for international players for a short time in 2017, but after 2018, all DLC items for the 3DS version became unavailable.