Difference between revisions of "Yggdrasil" 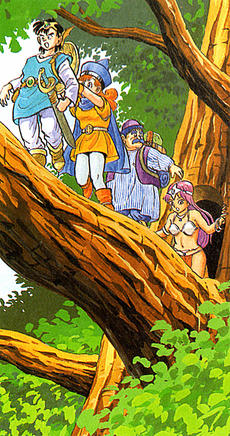 Yggdrasil, originally known as the World Tree is the term used to denote a great mythical tree in the Dragon Quest Series. Introduced in Dragon Quest II, it commonly appears in the names of items which originate from the tree, such as Yggdrasil Leaf or Yggdrasil dew.

The World Tree is found in the overworld at the intersection of four lone impassible mountains. By searching this tree, the player can obtain a Leaf of the World Tree. As in Dragon Warrior II, the party may only have one leaf at a time.

Yggdrasil is a location in Dragon Quest IV. It appears simply as an immense tree hundreds of times the size of any real-world tree, with the elven village of El Forado at the base. Located slightly east of Mintos, surrounded by a ring of impenetrable mountains, it is only accessible by balloon flight.

The party visits it late in the game, after acquiring the balloon. After ascending to its boughs, they encounter Orifiela, a Zenithian who fell from the sky and landed in the Tree's branches. She helps them find the Zenithia Sword, which is nearby, and, after being rescued, agrees to show them the way to Zenithia.

The World Tree can be found in Krage. When the party travels there in the past, the World Tree hasn't blossomed yet. It is a Sacred Tree. The residents of Krage, under the influence of WolfDevil try to cut down the tree before it becomes a World Tree. The party stops this from happening and the tree is able to become a World Tree. The party can obtain a World Leaf by going to the World Tree. If the party does not have a World Leaf, a bird will drop one from the tree for the party to pick up and obtain. If they do, the bird will not drop one. They can also obtain a World Dew from Krage. However, only the Hero can get on line to buy one and if supplies run out before the Hero gets one, the party will have to leave town and enter again to try and get another one. If they already have one, they will not be allowed to buy another.

In Dragon Quest IX the tree is part of the central plot and appears at the top of the Observatory. The Yggdrasil is considered the gateway to the realm of the Almighty, as when it blossoms the Starlight Express comes to ferry Celestrians. However, as part of the events of the game, when the tree blossoms, it instead causes a disaster in the Observatory. It is later revealed that Yggdrasil is in fact the goddess Celestria, the daughter of the Almighty, Zenus. She became Yggdrasil to show Zenus that even though mortals were flawed, some still have good in their hearts.

Yggdrasil comes from Norse mythology. It literally means World Tree and it is the tree that supports the entire world.