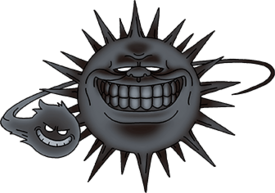 Ziggy (サコサン, Sakosan) is an infamous monster that appears exclusively in the 3DS version of Dragon Quest VIII: Journey of the Cursed King. He can form the team Heavens Above with Ray Churls and Starsky.

Star Duster (闇の輝き, Yami no kagayaki) can be found south of Red's Den near Pickham after beating the game.

Ziggy and Star Duster are references to English musician David Bowie, who used the name Ziggy Stardust as a flamboyant alter ego between 1972 and 1973 for the song of the same name and its album, The Rise and Fall of Ziggy Stardust and the Spiders from Mars.