(Redirected from Cheiron's Bow)
When used as an item in battle, this bow restores 30 or more HP to all allies.
(Description when selecting the Cheirons' bow in PS2 Dragon Quest VIII.)

Cheiron's bow is a weapon introduced in Dragon Quest VIII. It is a weapon of mid-tier strength that heals the party when used as an item in battle, allowing for the user to ease the burden on the party healer.

The Cheiron's bow is a weapon for Angelo with an attack bonus of +63 and restores 30~40 HP when used in battle. It can be sold for 4,500 Gold Coins. You can find it at the top of Rydon's Tower. You require either the Ultimate Key or the Magic Key to unlock the chest. 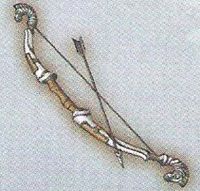 Artwork for the bow

Cheiron's bows can be purchased in Dourbridge for 22,400 gold and sold for 11,200 gold. They have a two star rarity and an attack bonus of 92 when equipped. It's in game description is "A blessed bow that heals all allies if used as an item in battle." Armamentalists, Rangers, and Sages can equip them.

The bow's zebra accents are possibly a reference to Cairon, a centaur from Michael Ende's Never-ending Story who is described as being a zebra from the waist down. Cairon himself is an homage to Cheiron of Greek mythology, being a sagacious centaur who tutored such heroes as Achilles and Hercules.