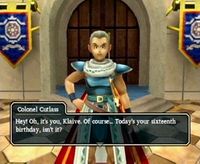 Colonel Cutlass is a minor character from Dragon Quest Swords. One of the Queen's most trusted henchmen, Cutlass heads the country's armed forces and sees to the day-to-day operation of the Hero's hometown. He is also responsible for the Queen's safety. He and the Hero seem to get along quite well.

In keeping with the Dragon Quest Swords quirk of all characters being named after a type of sword, a cutlass being a short, broad sabre or slashing sword, with a straight or slightly curved blade sharpened on the cutting edge, and a hilt often featuring a solid cupped or basket shaped guard.