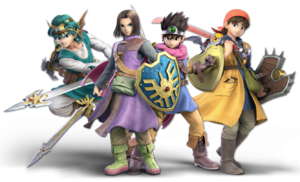 Each of the four Heroes, as they appear in Super Smash Bros. Ultimate.

The Hero 勇者 (Yūsha, 勇者?) is a playable character in Super Smash Bros. Ultimate and the main representative of the Dragon Quest series, being the third DLC character and the second to be part of the Fighters Pass. He was announced alongside fellow DLC newcomers Banjo & Kazooie at E3 2019, and was released on July 30th, 2019, where he was also made available for individual purchase for $5.99 USD, or downloaded automatically with the purchase of the Fighters Pass.

When the Hero originally began development, he was planned to be silent, similar to previous Dragon Quest protagonists. However, with the addition of voice acting in the Japanese version of Dragon Quest XI S: Echoes of an Elusive Age - Definitive Edition (as the localized version of Dragon Quest XI had voice acting from the beginning), plans were changed and voices for the Hero were added. As a result, each Hero has a different voice actor - Mitsugi Saiki for XI's Hero (reprising her role from Dragon Quest XI S), Nobuyuki Hiyama for III's Hero, Takeshi Kusao for IV's Hero, and Yuki Kaji for VIII's Hero.