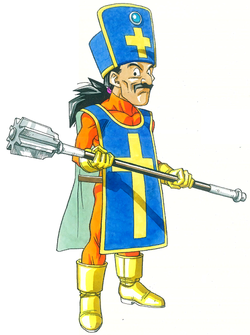 The priest vocation is available at the start of the game and has the unique skillset "Faith". Priests can also use skill points to learn Spears, Wands, Staves, and Shield skills. Their Coup-de-Grace is "Choir of Angels," which heals all party members and removes negative status effects. Priests easily surpass the durability and curative capabilities of Sages, but are not as MP efficient with their casting and lack the vital Kazing spell.

A character changing from a warrior to a priest in Walk

The priest vocation is available to players at the beginning of the game, and gives access to Boomerangs, Staves, and Wands.