The cave primarily serves as a connecting dungeon, similar to the Quagmire Cave. The island entrance exists as a decoy exit when the heroes are traveling south towards Moonahan from the northern continent.

The cave is named after Princess Gwaelin of the first Dragon Quest. It is assumed that she and the Hero from Dragon Quest traveled through the tunnel on the way to founding the kingdoms of Cannock and Midenhall. 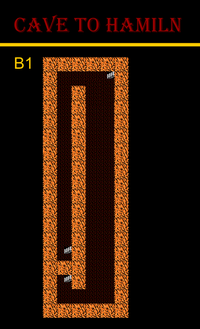