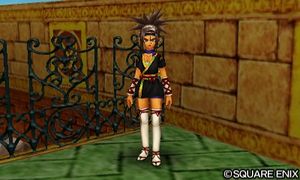 The kunoichi costume is a piece of clothing exclusive to the 3DS version of Dragon Quest VIII. It is a stealthy suit designed for female ninjas that enhances agility and evasiveness.

The kunoichi costume has a defence bonus of +99, an agility bonus of +20, and increases the wearer's evasion by 25%. It can only be equipped by Red and it changes her appearance when worn with the kunoichi headband. The costume is received as a reward for completing the Gigantes Stamp Card from Cameron's Codex and can be sold for 12,000 gold.