It had been announced on November 13, 2003 by Nintendo that they would release a new game product that make it's release in 2004. Nintendo didn't gave any information about their new project and stated that it would not succeed the Game Boy or the GameCube. On January 20, 2004, Nintendo announced the console under the codename "Nintendo DS". Nintendo only gave few information about their project, saying that the console would have two separate, 3-inch TFT LCD display panels, separate processors, and up to 1 gigabit of semiconductor memory. The name got changed into "Nitro" in March 2004 which also the document containing most of the console's technical specifications was leaked. The project name went back to "Nintendo DS" in May 2004 and a prototype was shown at the Electronic Entertainment Expo better known as the E3. Nintendo revealed on July 28, 2004 that the Nintendo DS has gotten a new design and the name of the console is the same as that of the project name.

The Nintendo Wi-Fi Connection is a free online game service run by Nintendo which players who owns a Nintendo DS can connect to the service through the Wi-Fi network using a Wi-Fi USB Connector or a wireless router. During the other release of the Nintendo DS series they are more based on the wireless router instead of the Nintendo Wi-Fi USB Connector. The usage of Wi-Fi was launched on November 14, 2005 in North America alongside with the release of Mario Kart DS.

Download Play is feature on the Nintendo DS generations. It is possible for users to play multiplayer games with other Nintendo DS systems with only using one game card. It has the same effect as the Wireless Adapters that has been released alongside with the Pokémon LeafGreen Version and Pokémon FireRed Version. It can only up to approximately 65 feet within wireless range of each other for the other system to download necessary data from the host system.

This app allows owners with a Nintendo DS systems to communicate with other Nintendo DS users within local wireless range. Users can enter text through the keyboard or sending them handwrite message or drawing pictures through the stylus and touchscreen. There are onyl four chatrooms (A, B, C, D) which only can allow up to 16 peoples in each chatroom. On Nintendo DS and Nintendo DS Lite systems users can only write messages in black. However, the DSi and DSi XL includes a new function, letting users write in either black or rainbow colored pen.

The following two Dragon Quest titles can be played as a result on the DS and DS Lite: 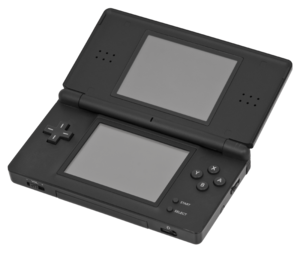 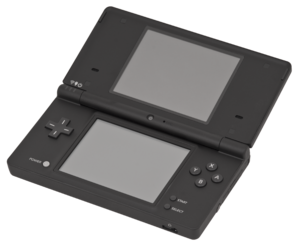 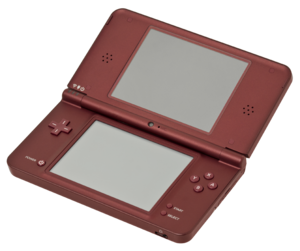 The Slime Speaker was a product released to serve as a stand and audio enhancer for the Nintendo DS. A Metal Slime based Speaker was also released for Japan.