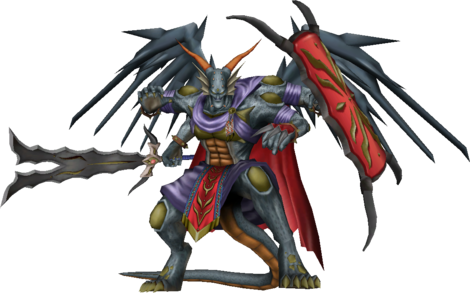 Xiphos the Deathbringer is the primary antagonist of Dragon Quest Swords: The Masked Queen and the Tower of Mirrors.

A number of years before the game begins, he amassed substantial power and was positioned to pose a significant long-term threat to his country's peace and prosperity. However, before he was able to take over entirely, he was defeated at the hands of four adventurers, including Claymore and Queen Curtana, who used the Rorrim Mask to weaken and then vanquish him. However, unbeknownst to the heroes, he turned this around on them and used the mask itself to survive by using its power to transport himself to the Mirror World.

He then lay in waiting, thought dead, until the time of Dragon Quest Swords, when he has recovered enough from his magical injuries to attempt domination once again. Using the minions he had left behind, such as his Emissary and others such as Großmesser, he is able to exert influence in the outside world and slowly bring its state of affairs into his favour. He once again utilises the Rorrim Mask, able to do so thanks to the very facts of its having defeated him, and controls the Queen when attempts to block his influence by wearing it. He then manipulates the Hero of Dragon Quest Swords, who has begun to investigate recent events along with several others concerned about them, into slicing the mask in half, apparently forever ensuring that no one can ever thwart his plans again.

However, on the advice of Minister Misericord, the party travels to the Mirror World and enlists the help of a minor deity, Draug, who is able to repair the mask and furthermore gives the Hero a sword that is capable of injuring Xiphos, perhaps the only one in the world able to do so.

Meanwhile, Xiphos has covered a huge section of the country in a lake of lava, and raised his new lair, the Deathbringer's Castle, out of it. Unfortunately for Xiphos, the party ascends the castle, defeating all of its guardians, and is able to square off with Xiphos. After a heated swordfight with the Hero in which Xiphos comes off worse, he transforms into a monstrous creature resembling a cross between a human and a dragon. He begins to swing wildly, destroying portions of the battle arena, and even using his own Master Stroke.

Xiphos is fought at the very end of the original game. He calls upon the player to use every skill he has learned so far, such as telegraphed attacks that must be blocked on reaction, and projectiles that can be reflected at him to inflict more damage. In his first form, he mostly keeps to his sword, striking with strength and precision.

After the player inflicts enough damage, he transforms into a monstrous creature resembling a cross between a human and a dragon. He begins to swing wildly, destroy portions of the battlefield, stomp on the Hero, breathe difficult-to-block fire breath, and even use his own Master Stroke.

In keeping with the Dragon Quest Swords quirk of all characters being named after a type of sword, a Xiphos is a double-edged, single-hand sword used by the ancient Greeks.