Abbot Francisco is a character in Dragon Quest VIII: Journey of the Cursed King who is the head of Maella Abbey.

Francisco is a diminutive older man with a tonsure shaved into his head; the back of his long white hair reaches nearly to his feet and worn in two tails. He also has a magnificent drooping mustache that reaches past his knees. He wears a purple and red dalmatic lined with gold, a miter decorated with a trident-shaped cross, and a gold rosary around his neck.

A descendant of Eagus and childhood friend of the Lord High Priest, he was the one who raised Marcello and Angelo after they lost their families, among many lost and displaced orphans. The monks of the abbey described their abbot as being full of vitality despite his advanced age, putting a wrench in Marcello's ambitions of becoming the next abbot. He was well-known for his kind heart and benevolence. Francisco had the utmost faith in the Goddess and even when confronted by the villainous Dhoulmagus, he refused to back down and had confidence that the Goddess would keep him safe from harm.

The abbot has a fun-loving side to his personality as well, as he was known for his love of puns and enjoyed the company of traveling performers. However, this may have contributed to his downside as he did not realize Dhoulmagus's true nature until his murder.

As Angelo explains his backstory to King Trode at the Riverside Chapel, he first came to Maella Abbey as a boy after his mother and father died as a result of the plague. He was immediately met with scorn by Marcello once he realized who the boy was, believing that his half-brother had come along to ruin his life once again. Abbot Francisco, who had witnessed the encountered, was saddened and attempted to comfort the young boy.

When the party returns to the abbey to give Angelo his templar's ring back, Abbot Francisco is said to be holding an audience with a jester. Despite their concern, the templars guarding the Abbot's residence refuse them entry without Marcello's permission. Angelo, sensing an evil presence from the jester, asks the party to journey through the Ruined Abbey to ensure that the Abbot is still safe since he is being punished. They make their way to a secret passage that leads to the Abbot's quarters and discover Dhoulmagus about to attack a sleeping Francisco, but he disappears at the last minute. Marcello and the templars discover the party in the abbot's chambers and promptly decide to throw them in the dungeons, believing them to be criminals even against Abbot Francisco's protestations. 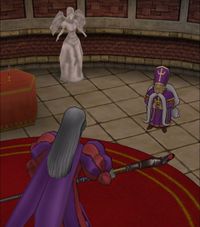 The confrontation between Abbot Francisco and Dhoulmagus.

Angelo then springs the party from their jail cells, having knocked out the templar in charge of guarding them by putting sleeping powder in his meal, then leads them to a secret passage in the dungeons that takes them back to the Abbot's residence. He explains that he trusts the party even though they just met since their presence earlier helped keep Francisco safe from the evil jester. When they reach outside, they find that the bridge leading to the Abbot's residence has been set on fire and the templars guarding it are nowhere to be found. Angelo and the party force their way inside the locked door, finding most of the templars inside mortally wounded already.

They find Dhoulmagus inside already with Marcello and Abbot Francisco. The jester is able to effortlessly flick away the captain then sets his sights on the Abbot. The Abbot is fearless in the face of the villain and has already accepted his death, believing that the Goddess will protect him from any harm if it is not his time to die. King Trode enters the scene and confronts Dhoulmagus, demanding him to lift the curse place on him and Princess Medea. Dhoulmagus then mocks the cursed king and readies his scepter above his head and hurls it like a javelin. In the ensuing chaos, the jester murders the Abbot in one fell swoop and gloats over his victory before making his escape into the night sky.

The following day, a funeral is held for Abbot Francisco amidst rain and the party is cleared of any suspicion of wrongdoing by Marcello. He orders his half-brother to join them on their quest to pursue Dhoulmagus. However, Angelo states that he'll join for the sake of Abbot Francisco, who was like a father to him, not because of Marcello's orders.

Francisco is the Spanish and Portuguese form of the Latin name Franciscus, which means "Frenchman". A famous bearer of the name was Saint Francis of Assisi, who was given the name "Francesco" by his father. He renounced his father's wealth as a young man and chose to devote his life to the poor, eventually founding the Franciscan order of friars.

In the original Japanese, Francisco's name Odiro is similar to the ancient Germanic name "Odilo", which was borne by an 11th century French saint who was also an abbot.